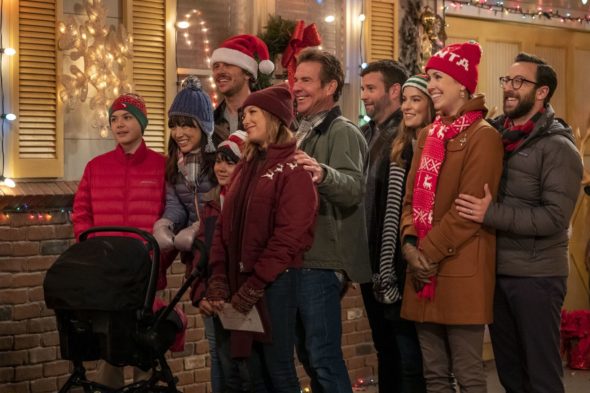 Streaming on the Netflix subscription service, Merry Happy Whatever stars Dennis Quaid, Bridgit Mendler, Brent Morin, Ashley Tisdale, Siobhan Murphy, Adam Rose, Elizabeth Ho, and Hayes MacArthur, with Garcelle Beauvais, Mason Davis, and Lucas Jaye in recurring roles. The first season of this comedic anthology series takes place over 10 days surrounding the Christmas holiday. Don Quinn (Quaid) is the strong-willed patriarch of the Quinn clan and a sheriff in Bucks County, Pennsylvania. He tries to balance the demands of his job and complicated family with the stress of the Christmas season. His youngest daughter, Emmy (Mendler), comes home for the holidays with Matt (Morin), her new boyfriend who’s also a struggling musician based in Los Angeles.

Loved the show…cant wait for more episodes….Is this show going to be based around national holidays?

Reminds me of my family. Worth another season

I absolutely love Tyler Ritter! I would love to see him more often!! Bring him back!!!!

Bring it back. Grows on you till you almost feel part of the family.