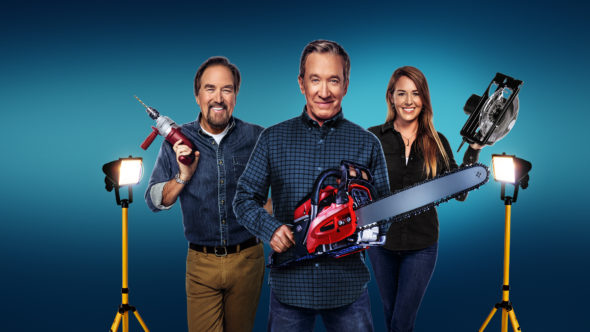 More Power is reuniting Tim Allen and Richard Karn, stars of the popular Home Improvement, a sitcom that ran for eight seasons on ABC.  The new History Channel series, which takes viewers into Tim Allen’s home to discover the history of tools, will arrive later this month.

History revealed more about the series in a press release.

“The HISTORY Channel announces the return of Tim Allen (“Last Man Standing,” “Home Improvement”) and co-host Richard Karn (“Pen15,” “Home Improvement”) along with woodworking do-it-yourself YouTube star April Wilkerson in the new nonfiction series “More Power” premiering Wednesday, June 29 at 10PM ET/PT. From Tim’s home shop, the trio tackles the supercharged history of tools, celebrating the coolest, most powerful, and iconic examples of tools, while showcasing their evolution of power from handheld and basic to the industrial and mighty — testing the limits in a way that only Tim can. They’ll also head out into the field to play with some of the biggest machines that power and serve our everyday lives and meet the men and woman who operate them. Along the way, Tim invites some of the most skilled makers into his shop from across the country, tasking them to create mind-blowing, specifically tailored innovations to fit his needs because there is always room for improvement. The series is executive produced by both Golden Globe(R)-winner Tim Allen and Richard Karn and hails from producers Spoke Studios (a Wheelhouse company) and Boxing Cat Entertainment.

“Albert Einstein once said, ‘I’m not a genius, I’m just passionately curious,'” said Allen. “Having the opportunity to explore my curiosity in depth and really get to know more about the people and things that make us what we are today gets me excited. And what better pal to have at my side than Richard Karn? We both share a great appreciation of people who can solve a problem not by talking about it, but by ‘doing’ it with creativity and amazing skills.”

“My friendship with Tim has lasted over 30 years… in a row!” said Karn. “The chance to do a show like Tool Time was unquestionably exciting. We may not have Binford but we still will have a world of fun!”

Each week, “More Power” puts its own special twist on the story of how basic tools, from blades and batteries to magnets and lasers, evolved to do the incredible things they do today, while answering burning questions like “How does a magnet light up an entire city?” Each 30-minute episode will be themed around one tool. In Tim’s workshop and leaning on April’s expertise, viewers will learn how tools work and break down everyday machines and appliances that feature these tools – from garbage disposals and chainsaws to the pneumatic wrenches used to change a tire. With Richard’s help, viewers will learn the history behind the how and why different tools came to be, while showcasing their most inventive, impactful and, in some cases, hysterical modifications. After the shop, the team will head out to the field where the fun really begins as they test drive the big machines from Bobcat bulldozers and excavators to a guillotine shear, celebrating the skilled experts who operate them. Lastly, each week Tim will invite one highly skilled maker into his shop to participate in “Tim’s Maker Challenge,” tasking them to create crazy new builds from an automatic leaf-vacuum-rake that sucks up leaves and puts them directly into the waste bin, to a battery-powered mobile kitchen that solves everyday problems in a spectacular way — even April gets in on the action. For better or worse, a new tool will be built and tested to see if it’s a cut above the rest and embodies the series’ mission of “more power.”

Check out the trailer for More Power below.

What do you think? Are you planning to check out this new series on History Channel?

Glad the show is coming back.

Glad to see Tim is back (Richard too). They never never old.

Great cast from home improvement two years on history channel. I love it so good please renewed another season look forward to seeing it every episode.