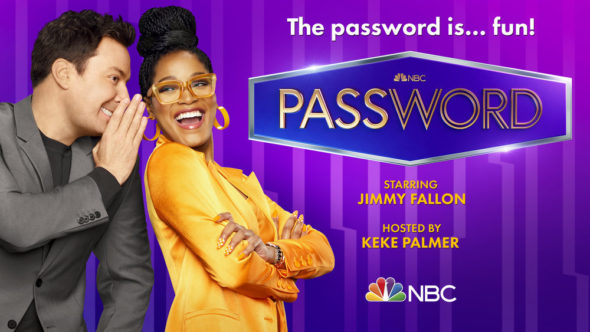 The original Password TV show debuted in 1961 and has amassed more than 3,500 episodes across various incarnations on ABC, CBS, and NBC. Now, the series is back and, for the first time, in primetime on the peacock network. Will this version have a long or short run? Will Password be cancelled or renewed for season two? Stay tuned.

A classic game show revival, the Password TV series is a word-guessing competition. In this game, contestants from across the country and all walks of life are partnered with celebrities to face off in the ultimate game of words. In addition to new contestants, in this incarnation, players from the 1980s versions return to see if they still have what it takes. Celebrity/contestant duos compete for cash prizes by guessing a secret password using just one-word clues. The contestant that wins two of three rounds, moves onto the bonus round, where a contestant can take home a $25,000 prize. The show is hosted by Keke Palmer and Jimmy Fallon is a recurring celebrity player. Other celebrities include Yvette Nicole Brown, Tony Hale, Jon Hamm, Chelsea Handler, Heidi Klum, Joel McHale, Chrissy Metz, Martin Short, J.B. Smoove, and Meghan Trainor.

What do you think? Do you like the Password TV series on NBC? Should it be cancelled or renewed for a second season?

Password should be renewed. I think its the best show on TV thus far. Would be a shame if cancelled.

Password normally is a great, fun game show when it’s played straight without all of the extra comments, gestures, and promptings from Jimmy Fallon and from the host, KeKe Palmer. This reboot is really too much! It is not very much fun and very exhausting, especially because of Jimmy who is extremely manic and obnoxious as a “permanent” (which ought not to be) celebrity player. To begin with, the host ought to be neutral as an MC and referee of the game. But KeKe is way too involved in hinting and reacting to the clues and has way too much… Read more »

It’s good show so far, but Jimmy doesn’t need to be on every episodes. If it renewed, they should mix it up more.

Re: Current NBC Password Program. I’m ok with Jimmy Fallon, new format and extra chances for finalist to win. I cannot believe one word of Keke. She upstages everyone on the set. Loud, phony accent and obnoxious! It’s too bad she needs such ugly glasses. She comes off as a Cardi B wanna be and really misses the mark. AND the truth is Keke is a very talented performer in so many other performance areas. I liked her when she wasn’t ‘woke’ back on the ABC show with Michael Strahan.