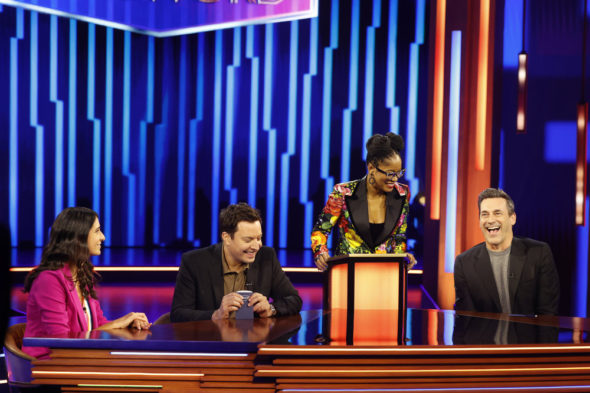 TV show description:
A revival of the classic game show, the Password TV series is a word guessing competition that is based on a television format that debuted in 1961. The original was hosted by Allen Ludden, the eventual husband of frequent player Betty White.

In the game, contestants from across the country and all walks of life are partnered with celebrities to face off in the ultimate game of words. In addition to new contestants, players from the 1980s versions will return to see if they still have what it takes.

Celebrity/contestant duos compete for cash prizes by guessing a secret password using just one-word clues. The fewer clues needed, the more points are earned by a team. The first team to reach 15 points wins a round and the celebrities switch contestants after the first round. For the third round, the contestants compete directly against one another to be the first to guess a password as five clues are revealed one by one. The contestant that wins two of the three rounds moves on to the bonus round.

In this part of the game, the contestant gives each of the two celebrities word clues in two 30-second rounds. The goal is for them to guess a total of 10 passwords beginning with consecutive letters of the alphabet (A through J, for example). For every correct answer, the contestant wins $1,000. If they get all 10 passwords, they take home $25,000.

What do you think? Do you like the Password TV show? Do you think it should be cancelled or renewed for another season?

Do not cancel this AWESOME tv game show! It is one of the best game shows on television.

I love new and old password..keep it on

I absolutely love this show… Sure hope it will continue!!

I so enjoyed this show. Jimmy Fallon is awesome. Please bring it back.