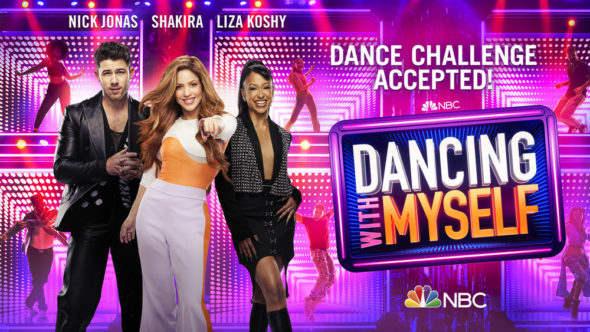 NBC aired seven shows last summer but has only renewed three of them. The peacock network clearly needs new successful programming. Does Dancing with Myself fit the bill? Will this new series be cancelled or renewed for season two? Stay tuned.

A competition series, the Dancing with Myself TV show is judged by Shakira, Nick Jonas, and Liza Koshy. Camille Kostek hosts. Episodes follow groups of everyday people as they compete in a series of high-energy dance challenges created specifically for the show by the celebrity judges and their guests. Isolated in their own pods, contestants have a short time to learn the new routines, add their own unique flair, and then perform their hearts out in front of a live studio audience. As each round of the competition progresses, the creators on the judging panel provide feedback. They and the members of the studio audience choose their favorite contestants to advance. In the end, the studio audience decides on the best dancer of the night who is then awarded a cash prize.

What do you think? Do you like the Dancing with Myself TV series on NBC? Should it be cancelled or renewed for a second season?

Can’t believe the choices are people blind to dancing? I’ve been performance dancing in modern dance all my life I’m 61 years old, & I think the pickings are wrong in S 1, ep. 1, totally crazy! Caitlin and Marcus were the best dancers they should’ve never been eliminated I know that the big model was okay & give him credit for his energy but I don’t understand how they could pick the big bouncy machine over precise cutting dancers like Marcus and Caitlin that was unbelievable totally unbelievable. However I am glad that there’s a show like this to… Read more »