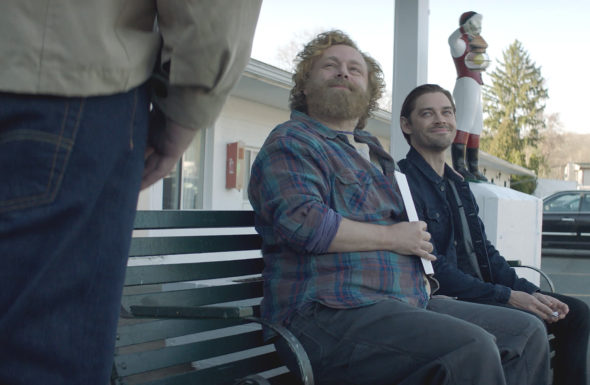 The chances for a third season of the Prodigal Son series got a little slimmer today.  HBO Max has opted not to rescue the cancelled FOX series and order a third season.

A crime thriller series, the Prodigal Son TV show stars Tom Payne, Lou Diamond Phillips, Aurora Perrineau, Frank Harts, Keiko Agena, Bellamy Young, Halston Sage, Michael Sheen, and Catherine Zeta-Jones. Season two guest stars include Christian Borle and Michael Potts. In the story, Malcolm Bright (Payne) is an extraordinary criminal psychologist who knows how killers think and how their minds work. In the 1990s, his father, Dr. Martin Whitly (Sheen), was a notorious serial killer called “The Surgeon” who killed at least 23 people. Since murder is “the family business”, Malcolm uses his twisted genius for good, to help the NYPD solve crimes and stop killers. He works alongside his longtime mentor, Gil Arroyo (Phillips), and two detectives — no-nonsense Dani Powell (Perrineau) and JT Tarmel (Harts), a born-and-bred New Yorker who questions whether Bright is a psychopath himself. In season two, Malcolm must deal with the repercussions of the first season finale and his father seeks to deepen his relationship with his prodigal son.

HBO Max and Warner Bros. TV (the lead studio behind the series) are both under the same corporate umbrella and the streaming service was considered the most likely option to continue the show — especially since HBO Max has the rights to stream the first two seasons. Deadline reports that the streamer “didn’t have space” and chose not to order season three.

Word is that Warner Bros. TV is still trying to find the drama new home. The studio has been successful in saving shows in the past, most notably when Lucifer was picked up by Netflix after FOX had cancelled it. A key difference is that Netflix had the rights to stream past seasons of Lucifer while it appears only HBO Max has the rights for the two existing seasons of Prodigal Son.

Check out our FOX status sheet to track the network’s new series pickups, renewals, and cancellations. You can find lists of cancelled shows here.
What do you think? Are you hoping that Prodigal Son will still find new life on a different outlet? Would you subscribe to a streaming service to watch it?

This was one of the Best Shows ever!! Great acting and story lines. Really looked forward to it every week. I hope another station picks it up. Canceling great shows like this is reason people are going to streaming!

I hope Prodigal son finds a new home it would be a shame to take such a great show off the air.

I want prodigal son to continue I’m very upset that you left season two wide open for so much potential it’s driving me and my friend nuts. Please continue it

Love Prodigal Son. Just about the only show that hasn’t gone political. Please find a home. Fox is going down the tube. Most shows are political that is why I’ve started watching older shows on dvds and streaming. Internet stinks because I live on the country.

I was hooked on Prodigal Son from day 1.
The cast, story line everything is great
Please do not cancel
WBKI channel 58.1 please take this show.
This show full of excitement. Keeps you on edge of seat.
Please save this show

Prodigal Son deserves to be saved. With c lever plot lines and a phenomenal cast i will watch it wherever it lands!

I love this show! Please save it!

Please do not cancel Prodigal Son.
I love this show. I’m tensed the whole show. You never know what’s going to happen next.
WBKI if no other station smart enough to take this show PLEASE take.
I love all the characters. All do great job.
I don’t have cable TV. Please keep on regular tv.

I LOVE PRODIGAL SON..GREAT CAST…VERY EXCITING..I CAN’T BELIEVE NETFLIX WON’T PICK UP LIKE THEY DID LUCIFER, WHICH I ALSO LOVE…

Yes! Please bring back Prodigal Son we love this show!!!!!! Yes I would pay to stream it.

PRODIGAL SON IS THE ONLY RELY REASON TO WATCH FOX. NO NEED NOW.

Yes please this show is awesome.