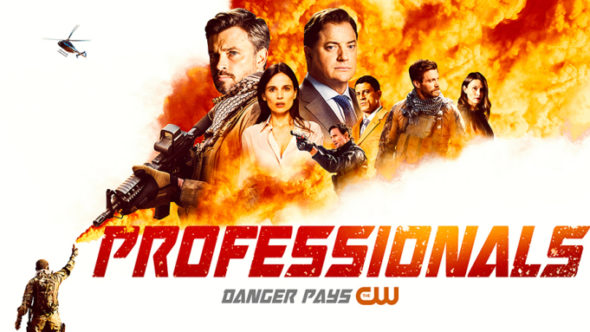 Tom Welling is headed back to The CW years after Smallville left the network. Professionals, a new action series that also stars Brendan Fraser and Elena Anaya, has been picked up by the network. In the series, Welling plays a special operative who helps keep the secrets of the rich hidden by any means necessary. Others in the cast include Saïd Taghmaoui, Ken Duken, Lisa Loven Kongsli, August Wittgenstein, Stevel Marc, Tanya Van Graan, and Nic Rasenti.

The CW revealed more about the upcoming series in a press release.

PROFESSIONALS follows Vincent Corbo (Tom Welling), a top-tier security operative, who is paid to protect the interests of rich and powerful clients by any means necessary – legal or not. After a next-gen medical satellite explodes on launch, Corbo is hired by the rocket’s designer – billionaire futurist Peter Swann (Brendan Fraser) – who suspects sabotage. Complicating Corbo’s new gig is his former paramour and now Swann’s fiancée, medical visionary Dr. Grace Davila (Elena Anaya), who is racing to help stave off a global catastrophe. As Corbo and his team of veteran security professionals investigate the rocket disaster, they expose a lethal conspiracy of Swann’s corporate rivals, corrupt government officials, and a shadowy crime syndicate – all working to destroy Swann and take control of his tech empire. Worse, Corbo must also contend with a rogue Europol agent (Ken Duken) who is hellbent on busting him for past sins.

What do you think? Are you excited to see Welling back on The CW? Do you plan to watch Professionals?

Yes. This professionals series is a keeper.. you go Tom and Brandon. Keep this going. Very good series from 2 professionals for real!

This series need a second run indeed, every one love this show it like watching a different creation of blind spot series

This show was very thrilled with excitement and action, this series need a 3 or 4 seasons run….

It was pretty good. Still waiting to hear if it gets picked up for a season 2 though.

Of course I’ll give it a try. I like spy stuff, and Tom Welling started it all.

Excellent news Smallville, Cheaper by the dozen is so funny movies so good stuff look forward new series. I can’t wait to see watch it.

Yes finally something without silly Teens in it..will watch this!

Yay! I will definitely be watching