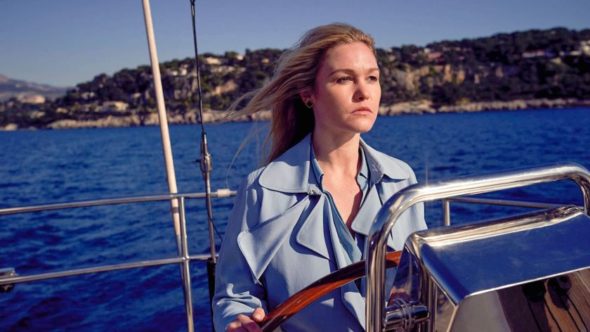 Riviera is returning to Ovation for its second season. The cable channel has announced a U.S. return of the mystery series, which stars Julia Stiles, Will Arnett, and Lena Olin. In season two, Georgina (Stiles) tries to find a way to live with her actions from the first season finale, but secrets from her past force her to explore her turbulent childhood.

A thriller, the series comes from the UK and was created by Neil Jordan. The show has already been renewed for a third year overseas.

Ovation revealed more about season two of Riviera in a press release.

“As previously announced, Ovation TV, America’s only arts network, has acquired the U.S. broadcast rights for the second season of the Julia Stiles-led drama series Riviera. After a successful first season, the thrilling drama series, set in the art world, will begin airing season two on Saturday, May 8 at 7pm ET / 4pm PT during the network’s Mystery Alley programming block. Launched in August 2020, Mystery Alley is Ovation TV’s Saturday night linear destination that celebrates the craft of mystery storytelling; from the intricate plots, complex characters, to visual style and cliffhangers.

In the second season of Riviera, Georgina (Julia Stiles) tries to find a way to live with her actions from the season one finale, but secrets from her past wash up on the sandy shores of the Cote d’Azur that force her to explore her turbulent childhood against her will. Following an unprecedented and unavoidable visit to her childhood home, Georgina returns with a refreshed sense of self to re-establish her power and position in the family alongside her charismatic confidant, uncle Jeff (Will Arnett).

Georgina very quickly becomes acquainted with the Eltham family, an English dynasty that sail in to the Cote d’Azur providing its shores with a dose of new money and glamour. She goes on to form relationships with the whole family, some that appear genuine from the outset and others that unravel around her as secrets, old and new, become exposed. Joining returning cast members Lena Olin, Dimitri Leonidas, and Roxane Duran are new cast members Juliet Stevenson, Poppy Delevingne, Jack Fox and Alex Hanipekum.”

What do you think? Are you a fan of Riviera? Do you plan to watch season two on Ovation?

Really love this show and hope to see all the seasons here.

Yes, Yes, this is my go to! I can’t wait for season 4 on Ovation

where do we rate this show