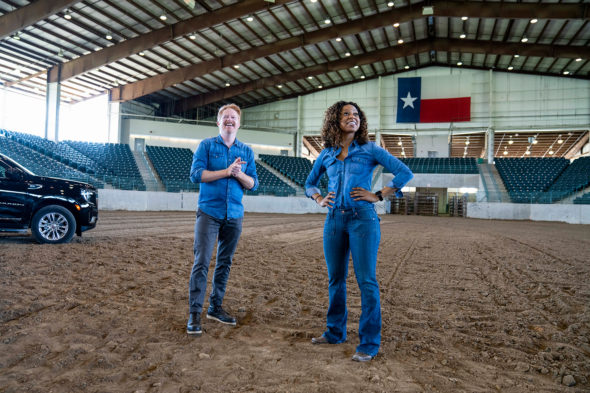 Which person’s story will be the most moving? Has the Secret Celebrity Renovation TV show been cancelled or renewed for a second season on CBS? The television vulture is watching all the latest cancellation and renewal news, so this page is the place to track the status of Secret Celebrity Renovation, season two. Bookmark it, or subscribe for the latest updates. Remember, the television vulture is watching your shows. Are you?

Airing on the CBS television network, the Secret Celebrity Renovation TV show is hosted by Nischelle Turner with the design team of Jason Cameron and Sabrina Soto. Each episode of the series gives celebrities in sports, music, and entertainment the chance to gift a surprise home renovation to a meaningful person who helped guide them to success. The program provides stars with a hands-on opportunity to show their gratitude to someone who has had a significant impact on their life’s journey by helping to realize the renovation of their dreams. Those participating include singer and choreographer Paula Abdul; singer-songwriter Lauren Alaina; actor and comedian Wayne Brady; NFL MVP and CBS sports analyst Boomer Esiason; singer-actress Eve; actor Jesse Tyler Ferguson; Survivor winner “Boston” Rob Mariano; NBA All-Star Chris Paul; singer, songwriter and actor Anthony Ramos; and Pro Football Hall of Fame running back Emmitt Smith.

The first season of Secret Celebrity Renovation averaged a 0.27 rating in the 18-49 demographic and 2.46 million viewers in the live+same day ratings (including DVR playback through 3:00 AM). While these numbers don’t include further delayed or streaming viewing, they are a very good indicator of how a show is performing, especially when compared to others on the same channel. There can be other economic factors involved in a show’s fate, but the higher-rated series are typically renewed and the lower-rated ones are cancelled. Find out how Secret Celebrity Renovation stacks up against other CBS TV shows.

Will CBS cancel or renew Secret Celebrity Renovation for season two? The ratings could be better but this show seems relatively inexpensive to produce and feels like a series that the network could use to fill in spots on the schedule around the holidays or in the summer months. I think it will be renewed. I’ll update this page with breaking developments. Subscribe for free alerts on Secret Celebrity Renovation cancellation or renewal news.

3/10/22 update: Secret Celebrity Renovation has been renewed for a second season on CBS.

What do you think? Are you glad that the Secret Celebrity Renovation TV show has been renewed for a second season? How would you feel if CBS had cancelled this TV series, instead?

I enjoy the show and hope that it’s renewed. I like seeing changes made to the homes, celebrities involvement in the project is humorous and love seeing the surprised faces on their relatives/ close friends when they see the updates.