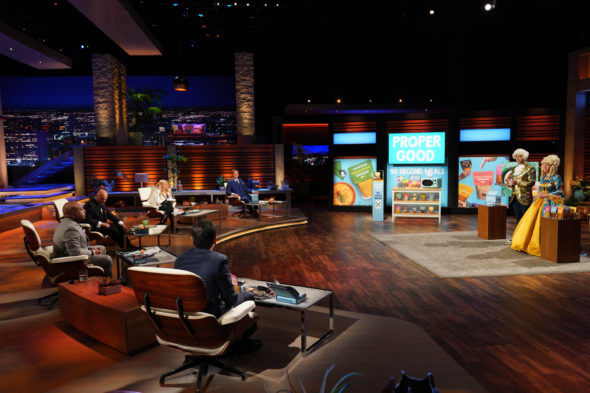 Who will make the biggest deal in the 13th season of the Shark Tank TV show on ABC? As we all know, the Nielsen ratings typically play a big role in determining whether a TV show like Shark Tank is cancelled or renewed for season 14. Unfortunately, most of us do not live in Nielsen households. Because many viewers feel frustrated when their viewing habits and opinions aren’t considered, we invite you to rate all of the 13th season episodes of Shark Tank here. Status Update Below.

An ABC business-themed reality series, the Shark Tank TV show follows company owners and inventors as they seek investments from a group of savvy, wealthy investors who are “self-made” tycoons. The regular “sharks” are Robert Herjavec, Kevin O’Leary, Barbara Corcoran, Daymond John, Mark Cuban, and Lori Greiner. The sharks offer everyday people a shot at the American dream and the possibility of striking business deals to grow their companies beyond their wildest dreams. Guest sharks in season 13 include Kevin Hart, Emma Grede, Peter Jones, Nirav Tolia, and Daniel Lubetzky.

What do you think? Which season 13 episodes of the Shark Tank TV series do you rate as wonderful, terrible, or somewhere between? Do you think that Shark Tank should be cancelled or renewed for a 14th season on ABC? Don’t forget to vote, and share your thoughts, below.

hi am a kid

Just wondering when it comes to baked foods, e.g. cookies, pizza muffins, or whatever, why no one on the panel sees a red flag with hydrogenated fats! Proudly the young entrepreneurs brag about no butter and say fat is plant based or happily admit it is hydrogenated
Another, yes plant food, is palm oil, quite nice for baking but also high in bad cholesterol, plus lowering the good . This is 2021 and I thought we were now more heart health conscious.
Just a hint…

I watch it but why must these high classed millionaires be so mean,rude, and cruel with their words!? Don’t care if it got cancelled!