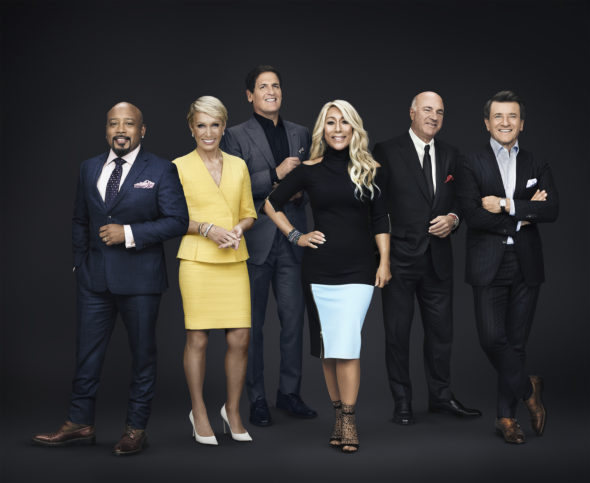 Will we see any must-have products this year? Has the Shark Tank TV show been cancelled or renewed for a 14th season on ABC? The television vulture is watching all the latest cancellation and renewal news, so this page is the place to track the status of Shark Tank, season 14. Bookmark it, or subscribe for the latest updates. Remember, the television vulture is watching your shows. Are you?

Airing on the ABC television network, the Shark Tank TV show follows company owners and inventors as they seek investments from a group of savvy, wealthy investors who are “self-made” tycoons. The regular “sharks” are Robert Herjavec, Kevin O’Leary, Barbara Corcoran, Daymond John, Mark Cuban, and Lori Greiner. The sharks offer everyday people a shot at the American dream and the possibility of striking business deals to grow their companies beyond their wildest dreams. Guest sharks in season 13 include Kevin Hart, Emma Grede, Peter Jones, Nirav Tolia, and Daniel Lubetzky.

The 13th season of Shark Tank averages a 0.54 rating in the 18-49 demographic and 3.73 million viewers. Compared to season 12, that’s down by 20% in the demo and down by 11% in viewership in the live+same day ratings (including DVR playback through 3:00 AM). While these numbers don’t include further delayed or streaming viewing, they are a very good indicator of how a show is performing, especially when compared to others on the same channel. There can be other economic factors involved in a show’s fate, but typically the higher-rated series are renewed and the lower-rated ones are cancelled. Find out how Shark Tank stacks up against other ABC TV shows.

Will ABC cancel or renew Shark Tank for season 14? This show has become a staple of the network’s schedule and continues to do well. Last season, it was one of the few shows to see its live viewership climb year over year. I have no doubt that it will be renewed. I’ll update this page with breaking developments. Subscribe for free alerts on Shark Tank cancellation or renewal news.

What do you think? Are you glad that the Shark Tank TV show has been renewed for a 14th season? How would you feel if ABC cancelled this TV series, instead?

This show is a necessity to this world, it helps the smaller guy who may have world changing ideas a chance at making them come to life.

Nope , this show has run its course, enough…..!