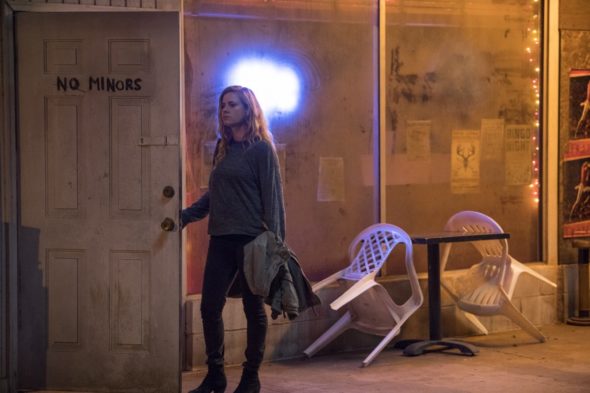 It’s not safe for you, here. So says the creepy trailer for the new Sharp Objects TV show on HBO. Watch it, below. An eight-episode limited series from Buffy the Vampire Slayer alum, Marti Noxon, season one of Sharp Objects premieres on HBO in July 2018, on a date TBA.

Learn more about the Sharp Objects TV series from this HBO press release.

Based on the bestselling novel of the same name by Gillian Flynn, SHARP OBJECTS stars Amy Adams as reporter Camille Preaker, who returns to her small hometown to cover the murders of two preteen girls. Trying to put together a psychological puzzle from her past, she finds herself identifying with the young victims a bit too closely.

Sharp Objects author Flynn also has a new deal with Amazon, where she is rebooting the British drama, Utopia. Check it out. Meanwhile Noxon, whose credits include UnREAL, Girlfriends’ Guide to Divorce, and Private Practice, has Dietland coming to AMC in June.

What do you think? How do you like the sound of the Sharp Objects TV show? Do you plan to check it out, when it premieres this July on HBO?