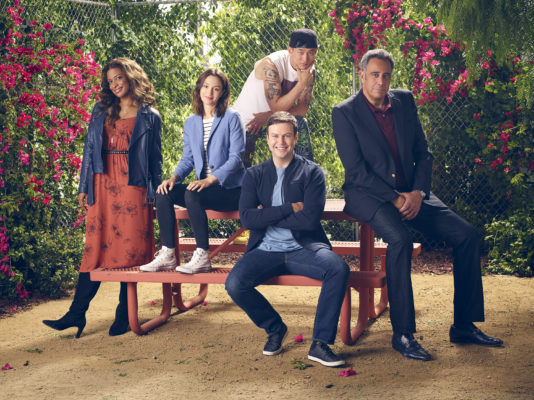 Can the PTA be funny?  Has the Single Parents TV show been cancelled or renewed for a third season on ABC? The television vulture is watching all the latest cancellation and renewal news, so this page is the place to track the status of Single Parents, season three. Bookmark it, or subscribe for the latest updates. Remember, the television vulture is watching your shows. Are you?

Airing on the ABC television network, Single Parents stars Taran Killam, Leighton Meester, Kimrie Lewis, Jake Choi, Marlow Barkley, Tyler Wladis, Devin Trey Campbell, Mia Allan, Ella Allan, and Brad Garrett. The show revolves around a group of single parents of seven-year-old kids. They lean on each other as they try to be good parents and maintain some sort of personal life at the same time. Will Cooper (Killam) has been so focused on raising his daughter that he’s lost sight of who he is as a man. He is helped by fellow single parents Angie D’Amato (Meester), Poppy Banks (Lewis), Miggy Park (Choi), and Douglas Fogerty (Garrett).

The second season of Single Parents is averaging a 0.60 rating in the 18-49 demographic and 2.57 million viewers. Compared to season one, that’s down by 32% and 24%, respectively. Find out how Single Parents stacks up against other ABC TV shows.

Will ABC cancel or renew Single Parents for season three? The series’ ratings were quite low last season and the numbers were worse this time around. I think the show will still be renewed but could see it being cancelled too. I’ll update this page with breaking developments. Subscribe for free alerts on Single Parents cancellation or renewal news.

5/21/20 update: Single Parents has been cancelled by ABC.

What do you think? Were you hoping the Single Parents TV show would be renewed for a third season? Are you sorry that ABC cancelled this TV series, instead?

Will they get renewed? Or is it really all over?

Very sad to see this show cancelled! It’s so funny & quirky and always makes me laugh. Such a great cast! Hopefully another network will pick this show up!!!!

I desperately hope that you will renew this series!!! Please please please don’t cancel. This show is my unwind at the end of the day and I laugh the whole way through!!!!

Please renew Single Parents as much as you can! Amazing show! I love it! Always waiting for the next episode!

Please do not cancel Single Parents I love this show.

I truly honestly think that single parents is a wonderful terrific funny inspiring show. Not only is it funny but it also teaches single parents in real life on how to raise there children and not be afraid to make a mistake or ask for help. They all lean on each other and are there for each other. as today’s society is becoming more and more young woman are becoming pregnant these days and are scared because there spouse left them. And this show is not only funny inspirational comedy theme but it also teaches about what it’s like to… Read more »

I love the twins! They remind me of my own kids, though they aren’t twins, they’re 6 years apart. My husband and I love this show. The whole cast works very well together!

I like the show but the kid that plays Poppy’s son ruins it. His character is awful and way to flamboyant. In my opinion it is ruining the show

Please don’t cancel Single Parents!! It’s our favorite show and we look forward to it every week.

Single Parents is my absolute favorite show!!
Please do not cancel!!

Sing Parents is absolutely hysterical. It’s very well written and everyone in the cast makes me smile. It’s the highlight of my TV week…. please don’t cancel it.

I like single parents and hope it gets renewed and finish the season.