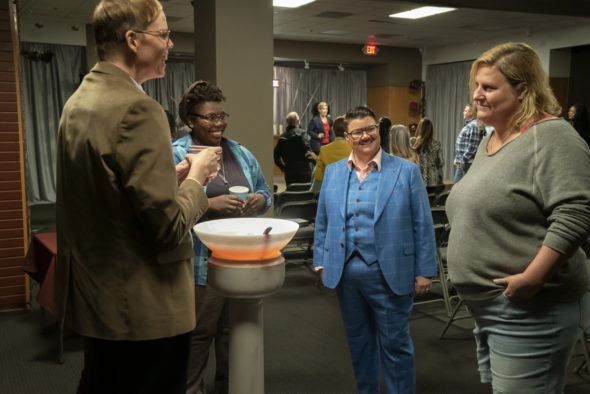 Somebody Somewhere has a premiere date. HBO has set a January launch for the comedy series inspired by the life of Bridget Everett. Starring Everett, Jeff Hiller, Mary Catherine Garrison, Danny McCarthy, and Mike Hagerty, the series follows a woman who struggles with her life in Kansas and uses her singing to break out.

“Starring and executive produced by comedian and singer Bridget Everett, the seven-episode HBO original comedy series SOMEBODY SOMEWHERE debuts on SUNDAY, JANUARY 16 (10:30-11:00p.m. ET/PT) on HBO and is available to stream on HBO Max. From Mighty Mint, Duplass Brothers Productions, and creators & executive producers Hannah Bos and Paul Thureen (writers on HBO’s High Maintenance), the series follows Sam (played by Everett), a true Kansan on the surface, but, beneath it all, struggling to fit the hometown mold. Grappling with loss and acceptance, singing is Sam’s saving grace and leads her on a journey to discover herself and a community of outsiders who don’t fit in but don’t give up, showing that finding your people, and finding your voice, is possible. Anywhere. Somewhere.

Cast regulars include: Jeff Hiller (Nightcap) as Joel, whose vision-board dreams of Faith, Family, and high-end kitchen appliances are ripped to pieces in a spiral of joy, shame, music, and stress rashes, after he befriends his high school idol, Sam (Bridget Everett); Mary Catherine Garrison (HBO’s Veep) as Tricia Miller, Sam’s resentful and scrappy sister, who is exhausted from trying to live up to hometown expectations; Danny McCarthy (The Ballad of Buster Scroggs) as Rick, Sam’s quietly unremarkable brother-in-law, whose secret sends Sam and Joel’s imaginations spinning as fast as the Kansas tornado that reveals the truth; and Mike Hagerty (HBO’s Lucky Louie) as family patriarch Ed Miller, a stoic Kansas farmer who believes if you just keep your head down and work hard… you’ll reap what you sow. He eventually learns that ignoring problems only makes them grow.

Recurring cast includes Murray Hill (Welcome to Flatch) as Fred Rococo, a University soil scientist by day, Master of Ceremonies in a flashy suit by night, who’s been through it all, done the work, and found his stable place of happiness in the land of sunflowers; Jon Hudson Odom (HBO’s Lovecraft Country) as Michael, Joel’s boyfriend who suddenly is playing second fiddle to Sam; Heidi Johanningmeier (100 Days to Live) as Charity, co-owner of the store Tender Moments with Sam’s sister Tricia; Jane Brody (Chicago Fire) as Mary Jo, Sam’s mother struggling with alcoholism.

Check out a preview for Somebody Somewhere below.

What do you think? Are you planning to check out Somebody Somewhere on HBO?