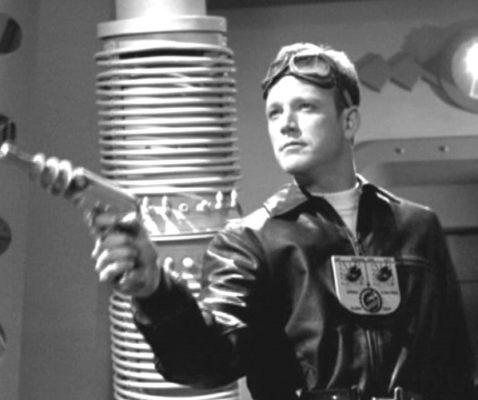 During a recent virtual panel, McNeill brought up the idea of a possible Captain Proton series. The Adventures of Captain Proton was a “holonovel” created by McNeill’s Voyager character Tom Paris and starring Wang’s character Harry Kim. The show-within-a-show emulated B-movies from the 1930s.

I loved the Captain Proton holodeck stories. I thought there should have been a lot more of that, partially because I liked the character I got to play. That could have been an amazing thing to explore the story within the story. And it was such a great echo where we could make fun of ourselves; we could reference old Star Trek plotlines. We could have done so many things in the Captain Proton holodeck story. So yeah, I think there is a great opportunity to go revisit that.”

The Voyager star revealed that he has taken the idea to producers:

I have talked seriously about that with David Goodman, who worked on Enterprise as a writer but is also on The Orville, where I got to direct a couple of episodes. I talked to Goodman about maybe writing that serial. I don’t know if it would be a CBS All Access thing or something that we could do that would be fun and silly and we can get our cast back together, which would be a blast.”

What do you think? Are you a fan of Star Trek: Voyager? Would you watch a Captain Proton revival?

I think Captain Proton would be awesome with all the crew members back together!

it coud be done as a short trek episode. re visiting old series from the past. i personaly would like a enterprise crossover. they did not get a good farwell and now with the new pike series comming up there is a chance to tell the nx story to captain pike. tpol visits the enetrprise and tells the story of the final mission of the nx enterprise. would be just like the tos episode the menargie where the tolosians tell kirk about pikes mission.

I would love to see this come to tv! I am a big fan of Captain Proton and would wait with baited breath each week for a new episode!

It is an interesting idea.

I would like to see all of the original crew take part in episodes as that is where it’s original appeal came from.

There is no reason why it could not be incorporated into a Voyager type story where even after they have returned home and lead their respective lives, pieces of the past could come back, using the Borg, Species 8472 or Q.

So you could have a parody type story tied into something involving the Federation.

Not a bad idea. Don’t think a full series would work, but it could be part of Short Treks.

Discovery is kind-of getting good. Picard has been the biggest let-down in Star Trek history. But THIS… you absolutely can not screw this up. I would 100% sign up for CBS All Access (or Bell’s service Crave in Canada if I have to) for this show. I would not hesitate. Sounds like fun.

I would watch anything Star Trek.

I enjoyed those episodes and would love to see a series.