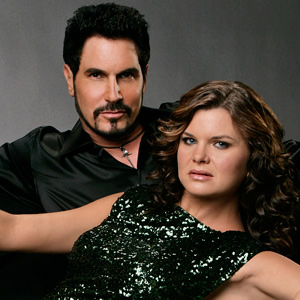 My hubby and I think, since all CBS good soaps have gotton cancelled, Bold & Beautiful, should now be 1 hr long

I think Bold and the Beautiful sends a horrible message to women! If your a piece of trash suck as Brooke Logan then you will get everything you want. If your a dignified elegant woman such as Taylor you will then be continually disappointed, hurt and stepped on by dirty animals such as Brooke Logan. Brooke Logan destroyed a very loving and healthy family and hurt children and yet she gets everything she wants. This soap opera seems to revolve around the low class Logans. I was incredibly disappointed as to who Ridge chose regardless of any lie told when… Read more »

Cut one of your commercials and instead use that moment to show previews of what will be happening the next day. Stephanie is now too old to be doing dirty deeds. We (as a group) was more impressed with her and Brooke getting back on good terms, and her helping the homeless and then you’ll through us a punch about her getting her grandson to lie on Brooke. You’ll need to come on and start a new story line. And please leave Brook and Ridge alone. Everybody wants them to stay together…..they make some marriages hot and steamy. They are… Read more »

I LOVE this soap. I am 38 years old and have been watching it since day 1. It’s a nice break from the every day stress of work and life, and I love that it’s only 30 minutes. And for those that mentioned morales……it’s a soap, it’s not real life. Get over it!

CUT ALL THERE SALARIES!

I am glad B & B is staying on the air and that it is only 30 minutes. I work and hardly have time to watch it all but it is a good soap! Thanks for your decision to keep it around a couple of more years!

Really like the show and hope it stays around for a long time. However, some things are utterly stupid. Brooke needs to woman-up on many issues. Ridge is running around with blinders on. Come on!! Try keeping it more real. The issues of being homeless, helping others is touching. Great job on that.

Please do not take B & B off of channel 7 (KIRO) in Seattle. I am 93 years old and I look forward to watching every day!

I have watched the Bold and the Beautiful since 1998. Love the show, but was not happy when Taylor died and then was brought back from the dead.

The reason I mentioned it, I would hope they would not bring anyone else back from the dead.

Love love this soap. As ridiculous as it is sometimes, we have to remember it is a soap. All the characters are perfect in their rolls. I wish Taylor would stop with the plastic surgery, she is getting quite scarey looking. Also needs more acting lessons, just not quite convincing. Other than that can’t wait to see it every day and am happy it will be around another 2 years.

I live overseas and watch the Bold and Beautiful. We are around 6 months behind and I would like to make a comment. I am watching the espisodes of Brooke, Hope and Oliver and Ridge. I think that by Ridge forgiving Brooke in what she “innocently” did with Oliver and then be forgiven by Ridge (don’t think this happens in real life) sends out the “wrong” signal to young adults. For once I would like to see Brooke be “liable” for her actions and that Ridge for once open his eyes and not forgive her. Also, I don’t think that… Read more »

You have left us only two soaps. I watch educational and political stuff all day. I watch soaps for relaxing entertainment. I can’t take your pitiful attempt to educate. How many people can continue to tune in every day to watch Nick being nagged to death. I have been around smokers trying to quit and none of them would have responded to your approach. But the real point is who wants to watch a soap to be educated. I hope you wake up before you lose your audience and have to go off the air.

Love Bold and the Beautiful. Have watched it since it started. I hope the networks do not cancelled any more of our soaps. I hate watching all of these doctor reality shows. Also hate to cook and am sick of these as well.

A little fantasy is a good thing.

I’m another that been watching B & B since it aired and always worked my lunch time around the time of airing. I had hoped that when As the World Turns ended that B&B would go to an hour long. Lately, I’ve enjoyed the story line of Stephanie and Nick dealing with cancer, from a scare to just wanting to live. Going into the streets to show the real world of the homeless (that’s it’s not all fashion). This show has sooo much to offer. I would like to see Eric and Stephanie remarry and have Eric truely living with… Read more »

I agree with Deborah Smith … This show is so ridiculous. I am so sick of Brooke–now she’s going to have the final Forrester male left? Pleeeeease! And Donna! Someone needs ot tell thie actress she looks like a duck billed platypus! It’s really SAD she thinks the injections she is obviously getting are making her look attractive. She has some obviousl Barbie issues…the show shoudl insist she get mental help. And the constant doe eyed whining she does…Ugh! I really thought this was going off the air, given the way they are reversing every story line–Stephanie is reborn and… Read more »

I have been a fan of the Bold and Beautiful since it first aired. I am begining to think that everyone has lost their Morals is this any way to let our young fans think it is alright to sleep and marry everybody in the family. I know this is TV but you will be surprise of how many copycats are out there. I don’t want the story to end just changed the storyline. The dresses are simply beautiful. Oh do you need a extra

I’ve been watching B&B since it first aired. I honestly have to say that the soap is very boring and predictable. I don’t watch daily anymore, I can watch on Fridays and know exactly what took place the other four days. At this rate I might tune in every other Friday. The storylines turns full circle every year. Stealing designs, Brooke and Ridge’s troubles, the young adults storylines are the same as in the beginning of soap. The storylines repeats over and over again. I’m sorry but in a way I wish that the contract wasn’t renewed. CBS took off… Read more »