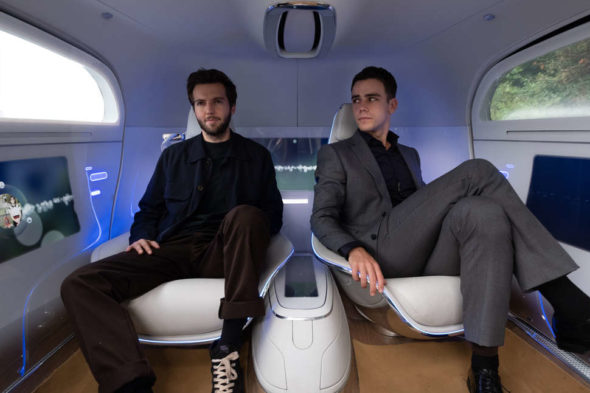 Is it possible to beat The Feed? Has The Feed TV show been cancelled or renewed for a second season on Amazon Prime? The television vulture is watching all the latest cancellation and renewal news, so this page is the place to track the status of The Feed, season two. Bookmark it, or subscribe for the latest updates. Remember, the television vulture is watching your shows. Are you?

Airing on the Amazon Prime streaming service, The Feed stars Guy Burnet, Nina Toussaint-White, Michelle Fairley, David Thewlis, Jeremy Neumark Jones, Clare-Hope Ashitey, Osy Ikhile, Shaquille Ali-Yebuah, Chris Reilly, and Jing Lusi. Written and executive produced by Channing Powell and based on the novel by Nick Clark Windo, the TV show focuses on our addiction to technology, our fear of what it’s doing to our brains, and our terror of having to live without it. In the near future, a high-tech implant connects our minds to “The Feed.” Every interaction, emotion, and memory can be shared instantly. Tom (Burnet) and Kate (Toussaint-White) are a young couple that’s trying to resist their addiction to tech.

Will The Feed be cancelled or renewed for season two on Amazon Prime? Unless they decide to publicize viewership, it is difficult to know if a show has been successful enough to warrant a renewal. Showrunner Powell says that they have plans for several seasons but, to be honest, there doesn’t seem to be a lot of people talking about the show. My gut tells me that it will be cancelled. I’ll update this page with breaking developments. Subscribe for free alerts on The Feed cancellation or renewal news.

What do you think? Do you hope The Feed TV show will be renewed for a second season on Amazon Prime? How would you feel if this series was cancelled this TV series, instead?

Definitely renewed!!!! I loved the show. I need to know what happens to everyone!

This is great show can’t wait to see second season.

Love this show!!! Please keep going! Season one is so good. One of the best thrillers ever!!

I want the Feed renewd for another season, if for no other reason, to watch Ben be utterly rejected by Tom and their mother.

I loved it! Binge watched all seasons and sure hope it retirns!

I find it odd, that such a great show about being “plugged in” to a social global network itself has no prescence on social media. I could not find an Instagram page, Facebook page, or Twitter page! People on Twitter are talking about it as they should. Shame on Amazon for not advertising it well, or giving it a chance to build a fan base by dedicating an official page to it. It’s not without its flaws like the weak and stereotypical characterization of women, or the plot holes. However its’ steady moving pace, visual effects, thriller aspect, horror elements,… Read more »

Renew! Renew! Awesome show. Never knew what to expect! If there’s a season 2, I’m all in.

I do hope there will be a second series! Really nail biting, sitting on the edge off my seat show! And there are so many questions still to be answered!