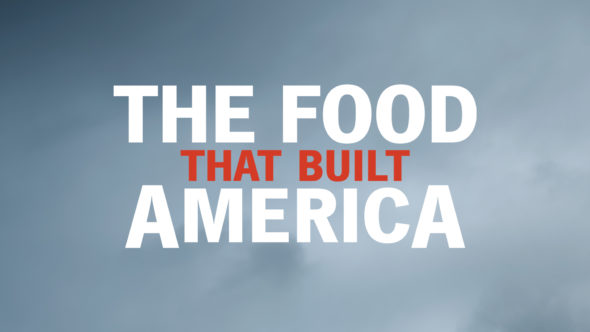 The Food That Built America has been renewed for a second season by the History Channel. Adam Richman is hosting the series. There are 18 episodes of the hour series planned.

History revealed more about the series’ renewal in a press release.

“HISTORY is teaming up with food author, television personality and culinary entrepreneur, Adam Richman, for season two of its popular nonfiction series The Food That Built America about the food titans who shaped America, and to host new series American Made (working title) about the creation of America’s most groundbreaking inventions. After the success of its first season, which reached an impressive 18.8 million total viewers, season two of The Food That Built America will explore the incredible tales of innovation and rivalries behind more food industry tycoons and tell the stories behind some of America’s most loved and iconic brands such as Oreo, Kraft, McDonalds, Burger King, Cheetos and more. American Made hosted by Richman will celebrate American ingenuity by detailing how our nation’s products are made and showcasing both the process of the craft and the inspiration behind the idea taking viewers on a ride into the past, present and future. Season one will feed into America’s appetite, literally, and focus on the how? why? and where? items such as cheese, cookies, ice cream and beyond are made.

“At its core, HISTORY is known for providing information to our viewers that is as entertaining as it is enlightening, and we hope to do just that with these two series,” said Eli Lehrer, Executive Vice President and General Manager of HISTORY. “Both The Food That Built America and American Made represent the incredible imagination and grit of some of the greatest innovators and brands of this nation’s history while also feeding into our audience’s love of food. We hope the stories shared in both series sparks our viewer’s creativity and encourages them to lean into their own desire to build, create and better this world.”

“The more I learn about food, the more I realize that my favorite aspect has always been learning the root, origin, background and genesis of certain dishes and delicacies. I love the stories that food tells. As a longtime super-fan of the network, I’m beyond thrilled to partner with HISTORY on two series that speak to my passion of exploring the amazing stories of the edible world around us,” said Adam Richman, author and travel/food TV host. “I can guarantee you won’t look at many classic foods quite in the same way again. HISTORY has created two dynamic shows that pull the veil back on how and why certain brands and items that we know and love came to be, and has done it in a way that embraces the universal relatability and enjoyment of food. I’m truly honored that the network has trusted me to share these iconic food stories, and take them from their humble beginnings, through America’s grocery aisles, to viewer’s television screens.”

What do you think? Are you a fan of this series on History? Will you be watching season two of The Food That Built America?

I am loving the series Food that Built America! I have learned so much and how the food we take for granted from our shelves came about. The hard work and ingenuity it took to give a good product.

Yes I loved the history of it very interesting

Love this series so much!!!!! Cant wait for the next season to air!;

Love the concept. When does season 2 air?

I enjoyed learning how food shaped America especially how it changed our eating habits.
I understand they are filming in Conn. Can I know where they are filming the new episode. I live in Conn

In light of recent events, food has entered the public discourse. PLEASE include some of this in the new season.

Wow !!! What a series, just happened upon it and totally involved in the series, can’t wait for season two.