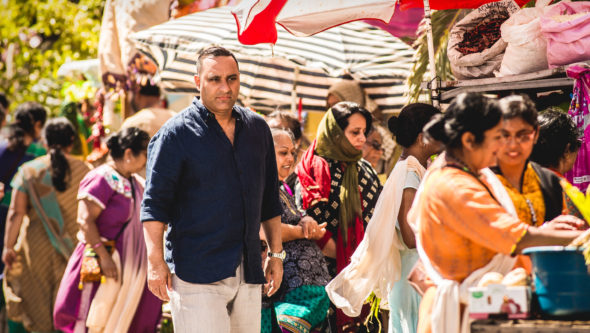 TV show description:
A “fish-out-of-water” tale, The Indian Detective TV show comes from creators Frank Spotnitz and Smita Bhide. The police procedural dramedy centers on Doug D’Mello (Peters), a Toronto police officer who, while visiting his father Stanley (Kher) in Mumbai, gets caught up in a murder investigation.

Although he’s a genial guy, Constable Doug D’Mello is nothing if not determined, and he usually manages to find a way to rebound from setbacks. Doug dearly wants to become a detective, but his inability to color inside the lines tends to get in his way.

After a big, potential case he and his partner Robyn Gerner (Cole) were investigating fizzles out, Doug takes off to visit his father in India. It seems, though, that rest and relaxation are not on his itinerary.

Although Doug has feelings for Robyn, they are, alas, unrequited. Still, she feels a deep loyalty to him. When his trip to India grows ever more complicated, she will find that loyalty tested by some risky business.

In Toronto, Doug and Robyn work with the charismatic Rocco Farinelli (Cavalheiro), a gifted detective. Although Doug envies Rocco’s good looks and professional success, can this would-be rival be as perfect as he seems?

A retired airline pilot, Stanley is not above exerting parental pressure, so Doug’s trip is fraught, even before he gets there. His father’s conceited, sly, and feisty ways have a way of working Doug’s last nerve.

While visiting Stanley, Doug meets lovely legal-aid laywer, Priya Sehgal (Parthiephal). After they discover the true story behind a false murder confession, Doug tries to find his footing in Mumbai. He soon sees connections between his Canadian case gone awry and a situation there.

When Priya first meets Doug, her life’s course seems set. Although she is engaged to marry a man of whom her parents highly approve, now she has to figure out whether she should forge her own path, or stick to her family’s well-laid plans.

In Mumbai, Gopal Chandekar (Haq) is a brutal gangster with big plans. Now, it is up to Doug to Doug to uncover them, and keep him from further crushing the Indian city’s most vulnerable citizens.

Meanwhile, back in Toronto, Gopal’s twin brother, Amal (also played by Haq) might be the only person who can manage his mercurial brother’s fury. Amal does everything he can to help their illicit business grow.

Finally, there’s billionaire real estate mogul, David Marlowe (Shatner). The Toronto police think highly of him, as he makes a great show of supporting them. Underneath his shiny veneer, however, is the real story of how he accumulates his wealth, and it is not so pretty.

As Doug and Priya search for the truth in Mumbai, he realizes how ill-at-ease he feels as an outsider in his parents’ homeland. He struggles to learn the rules of the game there, even as he heads straight into the sights of a lethal criminal.

What do you think? Do you like The Indian Detective TV series? Should this TV show be cancelled or renewed for another season on Netflix?

I absolutely love this show, watched all 4 episodes in two days. I was very disappointed to see that there was not a second season