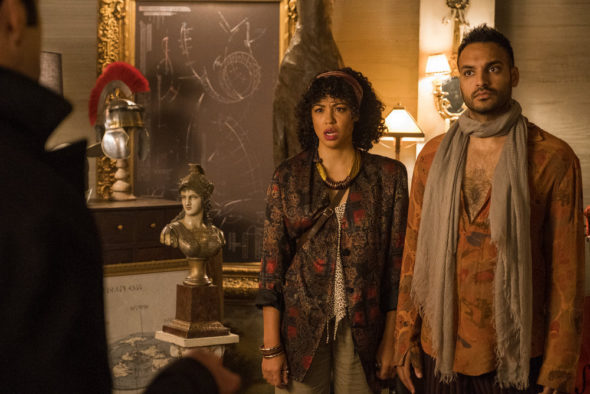 Fans of The Magicians were surprised by the cancellation of this SyFy series recently. It was announced last week that the series will wrap on April 1 with the end of the current season, and those behind the series knew the end was near when the season began.

In an interview with TV Insider, Sera Gamble said the following about how she felt about the future of the season at the start of season five of the Syfy series:

“We had the sense going into this season that Syfy, in particular as our first platform, was kind of hitting the point of ‘The cup is full and there’s no more room.’”

Those involved did try to find a new network for the series, but that search failed. John McNamara spoke about that search:

“None of them seemed in the end like a perfect financial or creative fit. And so we reluctantly just decided, ‘Well at least we have this season finale that was crafted to also be a series finale.’ It was kind of always going to pull double duty.”

The cast has also spoken about the decision to end The Magicians. Sera Gamble revealed that the cast was emotional about the series coming to a close:

“Everyone is pretty savvy about how the business works. All the writers, the actors, our whole team. And so coming into this season, everyone was pretty level headed and aware that we had hit a certain point in the lifespan of this kind of show. And people were really emotional about it, but in many ways, that was because we’ve created a family over the last several years that really wanted to do right by the show. So aside from the musical that came out of John’s moment of denial, we tried not to indulge in any denial about it. We wanted to make sure it was a really satisfying conclusion. And so when Henry and I wrote the finale, there really wasn’t a difference in approach to writing it because I honestly never counted on there being another season.”

Several members of the cast went to social media to talk about the series ending. Check out their posts below.

It’s with a heavy heart, that after 5 glorious seasons THE MAGICIANS will not be renewed for a sixth To say this show changed my life would be an understatement. It has been the most magical gift, and I feel so lucky to have been a part of it. Playing Alice Quinn has been an honor. I love her dearly and I will miss her so Thank you Lev for writing these books with beautiful worlds that we all got to play in for 5 years. I can’t thank our incredible Showrunners, EP’s, Directors, Writers, Studio/Network, and Crew enough. This cast and crew is my family and it’s going to take me a while to process not getting to spend 16 hours a day with them. Every person involved in this show poured their hearts and souls into every moment and I’m forever grateful for them. But none of this would have been possible without the fans. Our fans are the most passionate giving people out there. Thank you for making this experience so moving and heartfelt. I love you. I’ve been going through my phone all morning trying to figure out the best group of photos to post on here and I got overwhelmed with the literal tens of thousands of amazing memories I have of the last five years. Way too many photos to post so I’ll leave this one photo I took the first week of filming five years ago. Please excuse the flood of behind the scenes photos I’m gonna be posting over the next few weeks while we still have five incredible episodes left of our beloved show ❤️ #themagicians

SALUD!! All You Magicians, both old and young .. I humbly and sincerely Thank You for Believing in us .. And I thank you for your incomparable support since 2015 .. We worked SO VERY HARD making this wonderful and unique TV series about Magic week to week for 5 years .. I learned so much .. Not only about myself, but a macro-perspective on the people both within and without “The Industry” and the mechanisms of running a successful Television Program .. I have met SO many WONDERFUL fans .. At conventions , airports, airplanes, restaurants, bars, coffee shops, and even walking through a mad-house of hundreds and hundreds of people in Times Square at midnight .. And they ALL say the same thing: WE LOVE THE MAGICIANS!!! Thank.you Magicians Fam, because WE LOVE YOU And we existed because of you .. THANK.YOU XOXO .. And as I write this, in honor of easily one of the BEST Characters ever in my charge, in a career of 33 years (and counting! :)), Dean Henry Fogg .. I salute you Henry .. And I sip a fine, fine Scotch in a very cool, off the grid hotel in honour of you :)) .. Thanks again, and disfruta the rest of Season 5 of The Magicians .. Love You Mucho XoXo @magicianssyfy #TheMagicians #TheMagiciansFam #TADA #FromTheDeansDesk #LetsSeeSomeMagic

It was the most creatively fulfilling part of my career to have a scene partner like Hale Appleman love him to the moon and back and loved this photo a friend took when I shot my last scene of the show on the last night of filming with @halebofosho it was nice way to close out the last five years. #themagicians

So honored to have been part of this show. @serathegamble and @johnthemcnamara are brilliant creators and the cast is so wonderful. Can’t wait to see more of all their work in future projects <3 https://t.co/0dgpOxXT74

What do you think? Are you sad to see The Magicians end next month?

i just can not believe that you cancelled the magicians. its the best show on tv and im very upset that you just end it. i dont want to say goodbye to them. i love every charcter on there and how could you just decide to end it. there are so many different things you could of done. its the perfect cast and i hope you will reconsider.