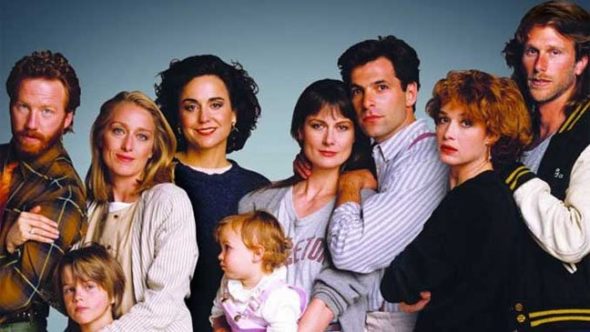 Michael, Hope, Elliot, and Nancy of Thirtysomething could be returning to the small screen. ABC has announced that it’s ordered a pilot for a sequel series called Thirtysomething(else). Picking up decades after the last time we saw the Steadmans and the Westons, this new series would focus on the adult offspring of the Thirtysomething characters.

Ken Olin, Mel Harris, Timothy Busfield, and Patty Wettig from the original show have signed to return. Original series creators Marshall Herskovitz and Edward Zwick are behind the sequel. A family drama, Thirtysomething ran for four seasons and 85 episodes on ABC, from 1987 until 1991.

“thirtysomething(else),” a sequel to the groundbreaking series “thirtysomething,” has received a pilot pickup from ABC. The show will follow an ensemble of new faces playing the grown-up, 30-something children of the original cast reprised by Ken Olin (Michael Steadman), Mel Harris (Hope Murdoch), Timothy Busfield (Elliot Weston) and Patty Wettig (Nancy Weston). Apparently, raising children (even grown children) never ends, but who could have known how hard it would be for them to raise their parents?

During its original run from 1987-1991, “thirtysomething” quickly became a cultural phenomenon, garnering 13 Emmy ® Awards including Best Drama and two Golden Globe ® Awards. The series, which highlighted a tight-knit group of baby boomers and their struggles, celebrated its 30th anniversary in 2017.

For those who want a refresher, here’s the memorable Thirtysomething theme song.

What do you think? Have you watched the original Thirtysomething TV show? Do you think that a sequel series is a good idea?

I am tentatively hopeful for the thirtysomething reboot. What I mean by that is I loved the original show. I was a bit too young when it was on ABC, but saw it a few years later in the mid-late 90s on Lifetime and then maybe the channel Bravo. I loved all the characters (which doesn’t always happen!) and as a young adult, I envisioned a similar life for myself once I would reach my 30s – a life with a husband (exactly like Michael Steadman!), and educated, interesting, humorous friends – both married and single, and a beautiful old… Read more »

Another example of the complete lack of creativity amd lazy writing that prevails in Hollywood today. How about earing your money by coming up with a new idea instead of continuing to just rehash old shows over and over. I am pretty much ignoring any of the networks shows. It seems if you want anything new today you have to look for it in one of the streaming services.

Wow this is so great was my most favorite show ever! Now let’s bring back Alias and the original 24 and it would be complete!

Loved the show can’t wait to see it .

Would definitely watch, loved the show before, would love to see it again

I was a huge fan of thirtysomething, would be very interested in a sequel!!

Never whatched I do not care abc is not.achanel that I watch to much they cancelled very good shows to bring something that people never saw bring gosth whisperer back and the old charmed salvation and wiskey cavalier

It sounds like a great show! I loved the original series!

I loved the original Thirtysomething and would really like to see those guys 30 years later. I think it’s a great idea.