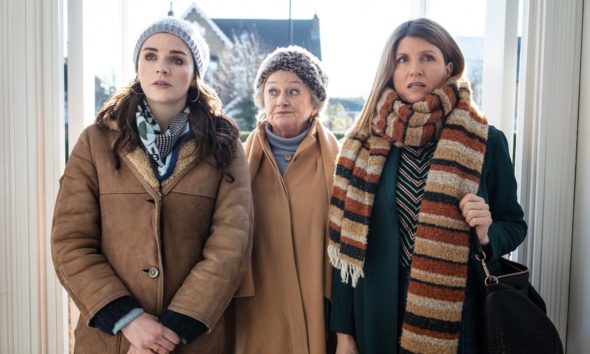 Hulu has set a premiere date for season two of This Way Up and the streaming service has also released a trailer. Aisling Bea, Sharon Horgan, Tobias Menzies, Aasif Mandvi, Indira Varma, Kadiff Kirwan star in the British comedy-drama which follows the life of a London woman who’s had a nervous breakdown.

Hulu revealed more about season two of  This Way Up in a press release.

“Season two of the BAFTA award-winning series is set after the events of the season one finale, with things in flux for Aine (Aisling Bea, Living With Yourself; Quiz) and her sister, Shona (Sharon Horgan, Catastrophe; Military Wives). Aine’s starting to leave her time in rehab behind and live less cautiously, which may not be entirely wise.

Will she and Richard (Tobias Menzies, The Crown; Game of Thrones) make a go of it? Or continue to exist in the odd tension of the employer and employee? How will Shona and Charlotte (Indira Varma, Game of Thrones; Luther) manage running a new business together and having feelings for each other? Will Shona be able to go through with marrying Vish (Aasif Mandvi, Evil; The Brink)? Planning a wedding? Can she tell him what happened? Is there anything more to tell?”

Check out the trailer for This Way Up season two below. The season arrives on July 9th.

What do you think? Are you excited about the return of This Way Up on Hulu? Did you watch the first season?