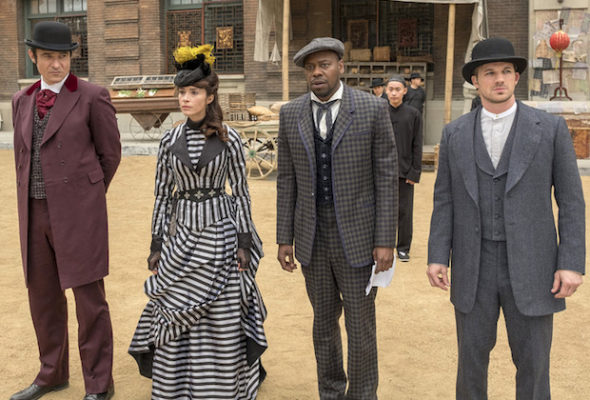 Tonight marks the season or series finale of Timeless and fans still don’t know if their show will be back for a third season. There have been a lot of cancellation and renewal calls this weekend but this show didn’t get either one.

It would seem that the ratings for tonight’s finale will have a lot of weight when deciding the time-traveling show’s future. According to NBC chairman Bob Greenblatt, “We try to honor the producers, let shows run and see what they do before making a decision that is premature… We are hopeful and yet realistic as we have a lot of shows. We are going to take a look at the shows after their run and hopefully make a quick decision on them.”

Last year, Timeless was infamously on the bubble and NBC ended up cancelling it. The show’s passionate fans erupted and that reaction supposedly convinced NBC to have faith and renew it for a second season.

Unfortunately, that faith didn’t translate into better ratings. Timeless has been airing on Sunday nights, without the benefit of having The Voice as a lead-in. Still, the series has seen its Live+Same Day ratings drop a whopping 44%. The series sees healthy boosts in delayed viewing but that’s not where NBC gets most of their income and, because they don’t own it, they don’t benefit in international sales either.

The network could move Timeless to Friday nights, when expectations are lower. After all, Grimm survived for five years on that evening. However, NBC already has plans for its Friday night schedule. Ratings-challenged Blindspot and Midnight, Texas will air on that night. The former will be paired with The Blacklist on Fridays starting in January. It may be Blacklist’s final run.

SPOILER ALERT Word has been that tonight’s season finale wouldn’t disappoint and it doesn’t. It also leaves fans with a big cliffhanger ending. “Do you want to get Rufus back, or what?”

Series co-creator Eric Kripke is understandably nervous that the show won’t get a third season and pleaded with fans to watch tonight’s two-hour finale “live.” Will this cause a big enough bump in the ratings? Since we don’t have a time machine, we’ll have to wait until tomorrow.

Report from the front: honestly, #clockblockers, I'm nervous. Could go either way. If you're a #Timeless fan, you must– MUST– WATCH LIVE TONIGHT at 9. We have to show a ratings spike. Spread the word! FIGHT! This is up to you now! (And its a GREAT finale). #RenewTimeless @nbc https://t.co/tw2ELKkeoV

Listen, we can argue whether this is fair or just. But it's the reality of network TV. They listen to ratings. We HAVE to watch live TONIGHT AT 9. It's our best chance. #clockblockers #Timeless #RenewTimeless @nbc https://t.co/S5k5UO4f2O

What do you think? Do you want Timeless to be renewed for a third season? Or, is it time to say goodbye?

please please renew this show! That finale was great and we need to know what happens!! There are so many stories to tell with a show like this and you learn history too!! Please!!!

Why leave such a cliffhanger if you were going to cancel? This reminds me of how the show Revolution was taken off the air. Please don’t cancel or at least do a two hour ending to it, when TV shows have a good following and then just disappear it hurts.

Please renew it. I can not watch live, I work nights but it is my favorite show and it is educational with all the very accurate history. It was left with such a cliff, we at least need an ending, please don’t cancel another open ended show with no closure.

Fantastic finale please, NBC give us another season!!

This show MUST be renewed, there is a huge following of this show, a tremendous fan base who loves this show, myself included. I really wish you could put Timeless on a different night, earlier than 10pm then you would probably see a ratings spike and try promoting it a little harder, get it out there, let the public know it’s here. We’ve done our part, this is a great show, the finale was the best of any finale I’ve seen this season so far and I’ve seen plenty of them. Don’t let this program go, it will be a… Read more »

Keeping my fingers crossed for another miracle…

This is an awesome show, please renew

This is a awesome show, please renew

Renew. This is the best show on television!

Timeless is one of the best show on TV! It would be such a shame to cancel it yet keep some of the awful reality shows going.

Don’t let Timeless go like SyFy did with Dark Matter. That was just plain stupid as would axing Timeless which is a proper show with likeable characters and good plotlines. Leave it alone. Go play with that reality crap. Does anyone actually watch that rubbish????

you are so right

Please renew I paid to watch the end because there was 15 minutes missing because of some golf thing going over time. The ending cannot be left like that. Please renew