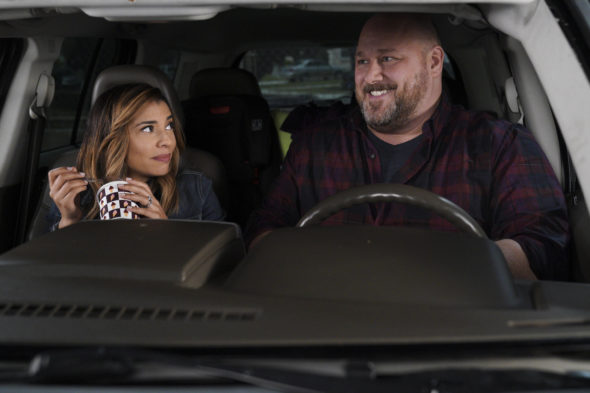 Remember when ABC announced the United We Fall comedy series back in May 2019? Well, the alphabet network is finally getting around to launching the Will Sasso and Christina Vidal-Mitchell comedy series this summer.

The family sitcom will debut on ABC on Wednesday, July 15th, at 8:00 PM with a pair of episodes. Single installments of United We Fall will air each week after that. There appears to be eight episodes so the season will likely conclude on August 26th.

Here’s the ABC press release and the trailer:

Parenting can be tough. Throw some overzealous extended family members into the mix and chaos will undoubtedly ensue. Join the ride with the latest addition to ABC’s comedy slate, “United We Fall,” set to premiere with back-to-back episodes on WEDNESDAY, JULY 15 (8:00–9:00 p.m. EDT), on ABC. The series is from Sony Pictures Television and ABC Studios. Episodes can also be viewed the next day on demand and on Hulu.

The profoundly realistic family sitcom follows the trials and tribulations of Jo and Bill, parents of two young kids, as they try to make it day to day as a functioning family. Bill’s very judgmental live-in mother and Jo’s large Latinx Catholic family will never hesitate to let our couple know they’re seemingly screwing up, but Bill and Jo will always have each other’s backs, united against everyone – other parents, teachers, doctors, specialists, coaches, co-workers and especially their kids.

“United We Fall” is the latest addition to ABC’s iconic family comedy brand, which includes two of TV’s top four comedies – “The Conners” and “The Goldbergs” – plus the Emmy® Award-nominated “black-ish” and its spinoff “mixed-ish,” which is about to enter its sophomore season; “American Housewife” starring Katy Mixon; and the new comedy “Call Your Mother,” starring Kyra Sedgwick, which debuts next season.

What do you think? Do you plan to check out the United We Fall TV show this summer? Do you think it will be a success?

Oh what a shame, I had high hopes for this one but only 8 episodes and a July release? 🙁 That says a lot about how much faith the network has in it. Why bother getting invested in a show that has no hope of getting renewed? I think I’ll have to pass on this one. Hopefully someone can figure out how to make a good family comedies again. There are so few good shows on tv these days.

I cherish original summer shows, with the caveat that I usually accept that they’re on during the summer for a reason. But I’ve been a Will Sasso fan since MADtv, and his turn on MOM has proven he can do this sitcom thing very well, and hope that if it’s any good at all, ABC won’t simply toss it on their summer series discard pile, which has piled up plenty of shows I’ve liked over the years.

like will sasso, and jane curtin, and will give this 2-3 episode watch…BUT… it doesnt look promising, more forced “comedy”, and bad acting by the adults

I will give United We Fall the first two episodes a look and I pray and hope that the series will be a hit.

I for sure plan on watching it! Well dvring it!