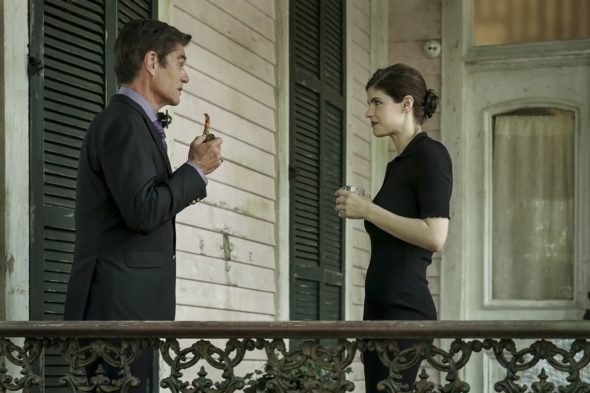 Anne Rice’s Mayfair Witches has been given a January premiere date by AMC+, and the streaming service has released a trailer. Alexandra Daddario, Jack Huston, Tongayi Chirisa, and Harry Hamlin star in the new supernatural horror series which is based on the book trilogy by Anne Rice.

AMC+ revealed more about the series in a press release.

The series will stream exclusively on AMC+ on Thursday, January 5, 2023, with the first two episodes available that same night. Subsequent episodes will rollout weekly.

Based on Rice’s best-selling trilogy, Lives of the Mayfair Witches, the 8-episode series focuses on an intuitive young neurosurgeon, Rowan (Daddario), who discovers that she is the unlikely heir to a family of witches. As she grapples with her newfound powers, she must contend with a sinister presence that has haunted her family for generations.

Check out the trailer for Anne Rice’s Mayfair Witches below.

What do you think? Do you plan to check out this new series on AMC+ in January?

Also, i just want to say, the book was not a feminist piece on the power of women as an earlier article on the show seems to be suggesting, rather, it was the story of a family and of the complexities they involve and the relationships between each person. Rowan was a neurosurgeon, and a woman, but neither played a leading part in the story, there were just simple facts, it wasn’t in my recollection a story about how great women are, or any other element of feminist propaganda, it was just a story about a woman and her lineage… Read more »

A promising start, if the acting seems a tad shaky and it seems as if the producers have gone for a heavy special effects look which i’m not entirely sure represents the way the book portrays things…. I think AD might be a good choice for Rowan, its unclear where Michael is in all of this though, and given his pivotal nature in the book that seems rather odd… and they have made Lasher a black guy, which you know is fine, but is that authentic to the book – does it add to the story or is it just… Read more »