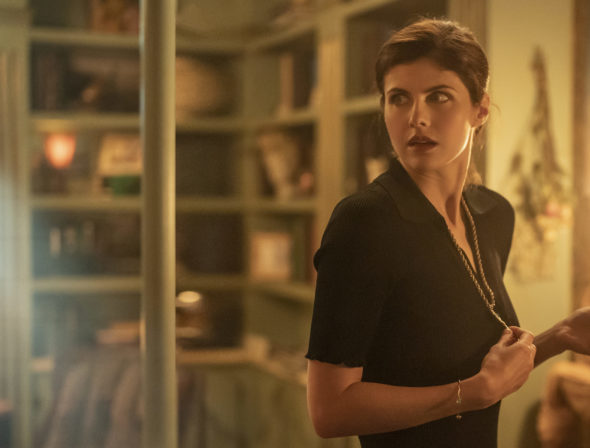 AMC is hoping this new series casts a spell on its audience. Has the Mayfair Witches TV show been cancelled or renewed for a second season? The television vulture is watching all the latest cancellation and renewal news, so this page is the place to track the status of Anne Rice’s Mayfair Witches, season two. Bookmark it, or subscribe for the latest updates. Remember, the television vulture is watching your shows. Are you?

A supernatural thriller drama airing on the AMC cable channel, the Anne Rice’s Mayfair Witches TV show is based on Rice’s book trilogy. It stars Alexandra Daddario, Jack Huston, Tongayi Chirisa, and Harry Hamlin, with Annabeth Gish, Beth Grant, Erica Gimpel, and Jen Richards in recurring roles. The story follows an intuitive young neurosurgeon named Dr. Rowan Fielding (Daddario). She has a heated discussion with her boss and he suffers an aneurysm, leaving her to wonder if she might have the power to cause people harm with her thoughts. Following the death of her estranged mother, Deidre (Gish), Rowan is shocked to discover that she is the 13th witch in the Mayfair family’s line and completes the coven. As Rowan explores her family’s supernatural history, she grapples with understanding and controlling some newfound powers, as well as her new role. She also discovers that there is a sinister shape-shifting entity named Lasher (Huston) that has haunted her family for centuries.

The first season of Mayfair Witches averages a 0.09 rating in the 18-49 demographic and 563,000 viewers. While these numbers don’t include further delayed or streaming viewing, they are a very good indicator of how a show is performing, especially when compared to others on the same channel. There can be other economic factors involved in a show’s fate, but typically the higher-rated series are renewed and the lower-rated ones are cancelled.

Find out how Anne Rice’s Mayfair Witches stacks up against other AMC TV shows.

Will AMC cancel or renew Anne Rice’s Mayfair Witches for season two? AMC has been cutting shows left and right, but the network appears to be “all in” on the Rice properties. I believe this one will be renewed for a second season and possibly a third and final season as well (since the show is based on a book trilogy). I’ll update this page with breaking developments. Subscribe for free alerts on Anne Rice’s Mayfair Witches cancellation or renewal news.

2/4/23 update: Anne Rice’s Mayfair Witches has been renewed for a second season by AMC.

What do you think? Are you glad that the Mayfair Witches TV show has been renewed for a second season? How would you feel if AMC cancelled this TV series, instead?

Very underrated show. Rice knows how to tell a story and this deserves to be renewwd. The cast is great, the acting superb. Daddario was an excellent choice.

what happened to the equalizer