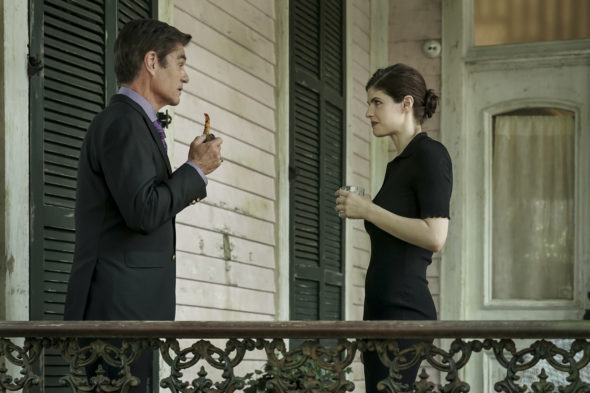 Rowan’s life sees big changes in the first season of the Mayfair Witches TV show on AMC+ and AMC. As we all know, Nielsen ratings typically play a big role in determining whether a TV show like Anne Rice’s Mayfair Witches is cancelled or renewed for season two. Unfortunately, most of us do not live in Nielsen households. Because many viewers feel frustrated when their viewing habits and opinions aren’t considered, we invite you to rate the first season episodes of Mayfair Witches here.

An AMC supernatural thriller drama series, the Anne Rice’s Mayfair Witches TV show is based on Rice’s book trilogy. It stars Alexandra Daddario, Jack Huston, Tongayi Chirisa, and Harry Hamlin, with Annabeth Gish, Beth Grant, Erica Gimpel, and Jen Richards in recurring roles. The story follows an intuitive and young neurosurgeon named Dr. Rowan Fielding (Daddario). She has a heated discussion with her boss and he suffers an aneurysm, leaving her to wonder if she might have the power to cause people harm with her thoughts. Following the death of her estranged mother, Deidre (Gish), Rowan is shocked to discover that she is the 13th witch in the Mayfair family’s line and completes the coven. As Rowan explores her family’s supernatural history, she grapples with understanding and controlling some newfound powers, as well as her new role. She also discovers that there is a sinister shape-shifting entity named Lasher (Huston) that has haunted her family for centuries.

What do you think? Which season one episodes of the Anne Rice’s Mayfair Witches TV series do you rate as wonderful, terrible, or somewhere between? Do you think that Mayfair Witches should be cancelled or renewed for a second season on AMC+ and AMC?

Entertaining. Look forward to the next episode.

So poor its not even vaguely worth a second look – it has been turned into yet another study on female power and the concept that males are of little merit at all – but worse, the acting is wooden and tedious, the endless repetition of plot points suggests they think the audience are stupid, the deviation from the book suggests they don’t care if the audience read the books at all, and Lasher is not meant to be a sad peeping in windows fat guy who is more creepy than menacing. This is everything wrong with television production today.… Read more »