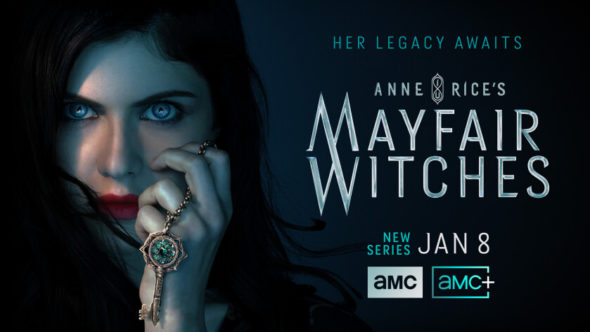 Anne Rice was a prolific author known primarily for her gothic fiction. Last year, The Vampire Chronicles series of novels was adapted by AMC as the Interview with the Vampire series. That show’s already been renewed for a second season. Now, the cable network has introduced an adaptation of Rice’s Mayfair Witches trilogy. Will it also be a success for AMC and earn a second season, or will it be cancelled instead? Stay tuned. *Status Update Below.

A supernatural thriller drama series, the Anne Rice’s Mayfair Witches TV show is based on Rice’s book trilogy and stars Alexandra Daddario, Jack Huston, Tongayi Chirisa, and Harry Hamlin, with Annabeth Gish, Beth Grant, Erica Gimpel, and Jen Richards in recurring roles. The story follows an intuitive and young neurosurgeon named Dr. Rowan Fielding (Daddario). She has a heated discussion with her boss and he suffers an aneurysm, leaving her to wonder if she might have the power to cause people harm with her thoughts. Following the death of her estranged mother, Deidre (Gish), Rowan is shocked to discover that she is the 13th witch in the Mayfair family’s line and completes the coven. As Rowan explores her family’s supernatural history, she grapples with understanding and controlling some newfound powers, as well as her new role. She also discovers that there is a sinister shape-shifting entity named Lasher (Huston) that has haunted her family for centuries.

What do you think? Do you like the Mayfair Witches TV series on AMC+ and AMC? Should it be cancelled or renewed for a second season?

*2/4/23 update: Anne Rice’s Mayfair Witches has been renewed for a second season by AMC.

Skip- not worth your time. Predictable mess

3 episodes in and so far all this show has in its favour, to my surprise to be honest, is Alexandra. Otherwise, the story is not the story from the book, the characters are as hollow and wooden as most of the acting, and the special effects look like those of a D grade high school produced movie – i mean plastic dummies would have given a better performance than some of the real actors, and will they please just replace Lasher, some over weight old man with dirty hair and as much charisma as a wet toilet roll is… Read more »