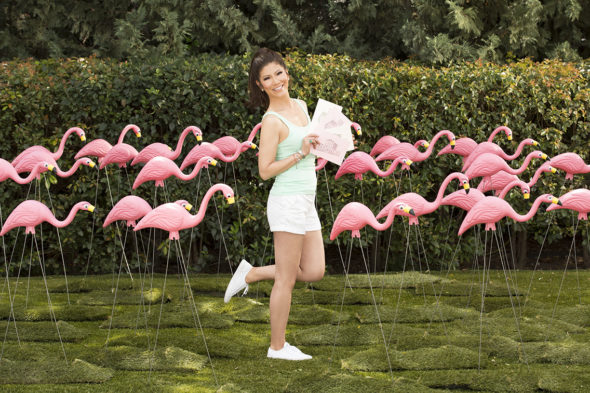 CBS is going back to the House for Summer 2022. The network has renewed the Big Brother TV series for a 24th season and paired it with the CBS series premiere of The Challenge: USA. Both shows kick off their respective seasons with 90-minute episodes on Wednesday, July 6th.

The Big Brother TV show is hosted by Julie Chen Moonves and typically airs three nights a week — Wednesdays (veto), Thursdays (eviction), and Sundays. The series follows a group of people living together in a house outfitted with 94 HD cameras and 113 microphones, recording their every move 24 hours a day. Each week someone is voted out of the house. The last remaining Houseguest wins a big cash grand prize.

The Challenge: USA is a special network iteration of MTV’s The Challenge, which debuted back in June 1998.  In this edition, veterans from The Amazing Race, Big Brother, Love Island, and Survivor will “compete in one of the most unpredictable and demanding games of their lives, living in a constant state of paranoia and unable to trust anyone but themselves.”

Here’s more information, as well as a teaser video, from CBS:

LET THE GAMES BEGIN! CBS ANNOUNCES THE SEASON PREMIERES OF THE SUMMER COMPETITION REALITY BLOCK OF “BIG BROTHER” AND THE INAUGURAL BROADCAST OF MTV PRESENTS “THE CHALLENGE: USA,” THE LATEST ITERATION OF MTV’S BLOCKBUSTER GLOBAL FRANCHISE, ON WEDNESDAY, JULY 6

MTV-Produced “The Challenge: USA” Will Air on CBS, Pitting CBS’ Reality Titans Against Each Other; All New “Big Brother” Houseguests Move in for the 24th Edition of the Network’s Summer Franchise

CBS’ reality competition shows are cranking up the heat with the back-to-back summer premieres of BIG BROTHER and THE CHALLENGE: USA, on Wednesday, July 6. BIG BROTHER opens the night with a 90-minute episode (8:00-9:30 PM, ET/PT), followed by the 90-minute premiere of one of the world’s most popular competition series, THE CHALLENGE: USA (9:30-11:00 PM, ET/PT). Both franchises will also be available to stream live and on demand on the CBS app and Paramount+*.

Produced by MTV Entertainment Studios and Bunim/Murray Productions, THE CHALLENGE: USA inaugural broadcast on CBS further underscores Paramount’s strategy of leveraging its popular franchises across the company’s global platforms. The summer premieres also come on the heels of recent ratings success. For three of the last four summers, including summer 2021, BIG BROTHER was a top 10 summer series in viewers, and top five in adults 25-54. Most recently, THE CHALLENGE: SPIES, LIES AND ALLIES finished the fourth quarter of 2021 as the #1 unscripted cable series (P18-34).

MTV’s THE CHALLENGE was the very first reality competition series when it launched on June 1, 1998 and is currently the longest-running reality series in the history of television.

Produced by Fly On The Wall Entertainment in association with Endemol Shine North America, BIG BROTHER kicks off season 24 as a group of all-new Houseguests move into the BIG BROTHER House. Expect the unexpected this summer with a season full of new and unique twists and turns to challenge the Houseguests. Following the premiere, the series will air Thursdays (9:00-10:00 PM, LIVE ET/ delayed PT), featuring the live evictions, and Sundays and Wednesdays (8:00-9:00 PM, ET/PT). Julie Chen Moonves returns as host. Paramount+ subscribers can continue to catch all the action on the BIG BROTHER Live Feeds. Emmy Award-winning producer Allison Grodner and Rich Meehan serve as executive producers.

In a special edition of the blockbuster global franchise, THE CHALLENGE: USA brings together fan favorites from CBS’ reality shows, including SURVIVOR, BIG BROTHER, THE AMAZING RACE and LOVE ISLAND, to compete in one of the most unpredictable and demanding games of their lives, living in a constant state of paranoia and unable to trust anyone but themselves. Following the Network’s 90-minute premiere, the show will air Wednesdays (9:00-10:00 PM, ET/PT). In addition to the $500,000 prize, the cast of THE CHALLENGE: USA will be competing for a spot on THE CHALLENGE: WORLD CHAMPIONSHIP (working title) that will stream on Paramount+. T.J. Lavin serves as host. Julie Pizzi and Justin Booth serve as executive producers.

Additional details about the upcoming seasons of BIG BROTHER and THE CHALLENGE: USA will be announced soon.

We’re doubling up on the heat this summer! 🔥 #TheChallengeUSA and #BB24 will BOTH premiere Wednesday, July 6 on CBS. pic.twitter.com/rQsFttGROz

Check out our CBS status sheet to track the Tiffany network’s new series pickups, renewals, and cancellations. You can find lists of cancelled shows here.
What do you think? Are you looking forward to watching the Big Brother or The Challenge: USA TV series this summer?

I can not believe that CBS keeps these horrible shows on like Big Brother Amazing race, love Island, and more. Why can’t you keep shows on like Bull, United States of AL and others. We want to see good show not all those others, put them on the game show channel.

The Challenge All Stars was a great idea – taking the Challenge back to its roots, with all the old Real World cast members. This is exactly the opposite approach, doubling down on what has RUINED the last few seasons of the MTV version of The Challenge, by diluting it with all the crap from these inferior ****** “reality” shows.