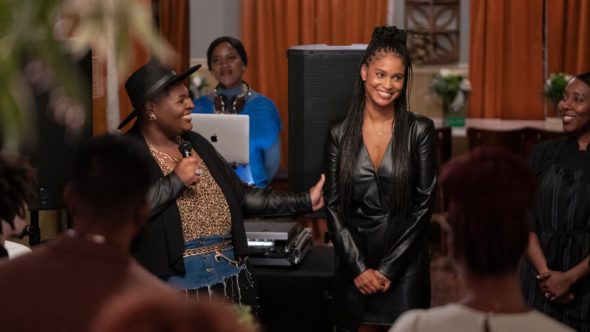 There’s rekindled romance in the second season of the Cherish the Day TV show on OWN. As we all know, Nielsen ratings typically play a big role in determining whether a TV show like Cherish the Day is cancelled or renewed for season three. Unfortunately, most of us do not live in Nielsen households. Because many viewers feel frustrated when their viewing habits and opinions aren’t considered, we invite you to rate all of the second season episodes of Cherish the Day here.

An OWN romantic drama anthology TV series, the Cherish the Day TV show was created by Ava DuVernay. It revolves around a different couple each season, and each episode spans a single day. The second season stars Joy Bryant, Henry Simmons, Terri J. Vaughn, and Richard Roundtree. In season two, the story revolves around the rekindling of a romance. Ellis Moran (Simmons) and Sunday St. James (Bryant) fell in love in high school and years later find themselves reunited in beautiful New Orleans. Ellis is a former basketball player who is now a single father of two, and Sunday is a vegetarian celebrity chef on the cusp of fame. The widowed father of Sunday, Mandeville “MV” St. James (Roundtree), is a proud, loving, and wry-humored former judge. Anastasia (Vaughn) is Ellis’ soon-to-be ex-wife and the mother of their children.

What do you think? Which season two episodes of the Cherish the Day TV series do you rate as wonderful, terrible, or somewhere between? Do you think that Cherish the Day should be cancelled or renewed for a third season on OWN?

Very poor acting in each show, compared to season one.