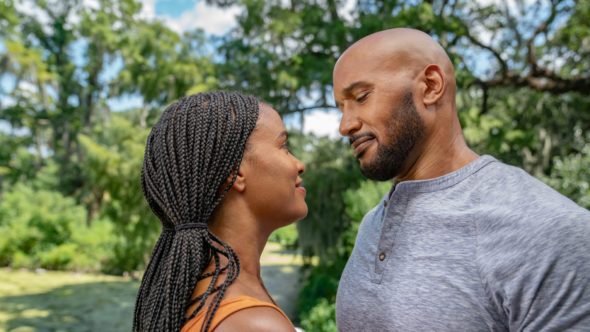 Will this couple stick together? Has the Cherish the Day TV show been cancelled or renewed for a third season on OWN? The television vulture is watching all the latest cancellation and renewal news, so this page is the place to track the status of Cherish the Day, season three. Bookmark it, or subscribe for the latest updates. Remember, the television vulture is watching your shows. Are you?

A romantic drama anthology TV series airing on the OWN television network, the Cherish the Day TV show was created by Ava DuVernay. It revolves around a different couple each season, and each episode spans a single day. The second season stars Joy Bryant, Henry Simmons, Terri J. Vaughn, and Richard Roundtree. In season two, the story revolves around the rekindling of a romance. Ellis Moran (Simmons) and Sunday St. James (Bryant) fell in love in high school and years later find themselves reunited in beautiful New Orleans. Ellis is a former basketball player who is now a single father of two, and Sunday is a vegetarian celebrity chef on the cusp of fame. The widowed father of Sunday, Mandeville “MV” St. James (Roundtree), is a proud, loving, and wry-humored former judge. Anastasia (Vaughn) is Ellis’ soon-to-be ex-wife and the mother of their children.

The second season of Cherish the Day averages a 0.04 rating in the 18-49 demographic and 239,000 viewers. Compared to season one, that’s down by 67% in the demo and down by 62% in viewership in the live+same day ratings (includes DVR playback through 3:00 AM). While these numbers don’t include further delayed or streaming viewing, they are a very good indicator of how a show is performing, especially when compared to others on the same channel. There can be other economic factors involved in a show’s fate, but typically the higher-rated series are renewed and the lower-rated ones are cancelled. Find out how Cherish the Day stacks up against other OWN TV shows.

Will OWN cancel or renew Cherish the Day for season three? The first season aired in 2020, and the way that people watch content has changed a lot in the past two years. Far more people are streaming their shows, so a big drop in the live+same day ratings isn’t unexpected.  Given that this is an anthology series (actors don’t have to commit to more than one season) and it comes from DuVernay, I think there’s a good chance that it will be renewed. I’ll update this page with breaking developments. Subscribe for free alerts on Cherish the Day cancellation or renewal news.

What do you think? Do you hope that the Cherish the Day TV show will be renewed for a third season? How would you feel if OWN cancelled this TV series, instead?