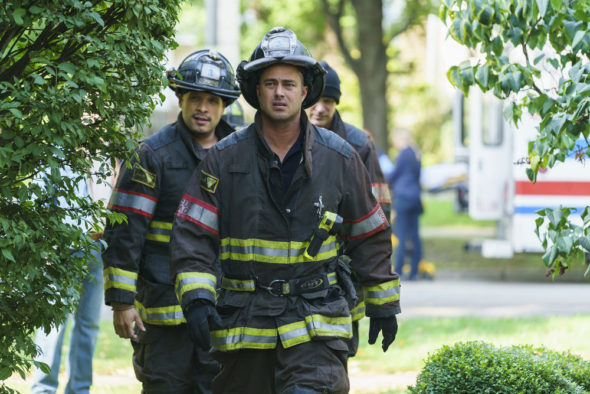 Casey and Severide are sticking around. Deadline reports Taylor Kinney and Jesse Spencer have signed on for season eight of Chicago Fire on NBC.

Alongside Kinney and Spencer, regulars Christian Stolte, Joe Minoso, and Yuri Sardarov have also reportedly signed on for season eight of Chicago Fire.

What do you think? Do you watch Chicago Fire? Are you glad it’s coming back?

I love all three Chicago series and never miss an episode !!

I love all the Chicago shows . CFD, CMED,AND CPD . I don’t ever miss them !

Chicago Fire is my top favorite show!!! I have watched since the beginning and never missed an episode.

I love Chicago Fire, I watch it every week. I would like for them all to return.

Yes very happy to the return of series.

Love the series of Chicago, always happy to watch.. thanks to all making us happy with yr shows

Yes! Love the Chcago trilogy. Record to watch all 3 every week.

One of my favorites! Glad to see regulars back.

Awesome program, I watch shows over and over again.
Great story lines.

Great news…Thank you to Evie for your comments.

Fantastic news…Fantastic show, along with P.D. and Med…..Great cast and Stories on all 3 shows…I totally agree with Evie’s comments.!!!

Just 2 stars have signed so far? Open up the wallet, you cheap garbage at NBC. This show has been a tremendous success. A big hit out of nowhere.

Chicago Fire, Chicago Med and Chicago PD are all fantastic shows. I hope they all stay around for future seasons. Storylines are so good and the actors/actresses are great in their roles. It doesn’t get any better when the storylines crossover from all 3 Chicago shows. Thank you to everyone in front of and behind the cameras as this is perfection to a show(s). Thank you.