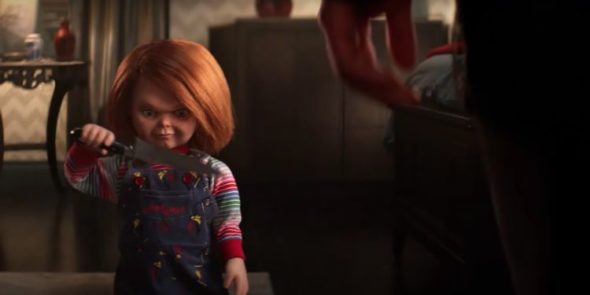 Chucky is finally going back out on a hunt. The series, based on the horror movie franchise, will arrive on Syfy and USA Network in October. It was expected to arrive sooner but the pandemic delayed production. The killer doll, who has been scaring moviegoers for 30 years, will terrorize a whole new location in the upcoming TV series.

Don Mancini, the man behind the films, will act as showrunner for the show. Jennifer Tilly is reprising her role from the films and Brad Dourif will once again voice the doll. Additional cast members include Zackary Arthur, Teo Briones, Alyvia Alyn Lind,  Björgvin Arnarson, and Devon Sawa.

The Wrap revealed the following about the plot of the upcoming series:

“In the new series, a vintage Chucky doll turns up at a suburban yard sale and throws an idyllic American town into chaos as a series of horrifying murders begin to expose the town’s hypocrisies and secrets. Meanwhile, the arrival of enemies — and allies — from Chucky’s past threatens to expose the truth behind the killings, as well as the demon doll’s untold origins as a seemingly ordinary child who somehow became this notorious monster.”

Chucky arrives on October 12th on both cable channels. Check out a teaser and more from USA Network and Syfy below.

Did you miss him? 👀 #Chucky premieres October 12 on @USA_Network and @SYFY. pic.twitter.com/WhOmPUAiv1

Playtime’s only just begun. Watch the full trailer during our “Legacy of #Chucky” featurette at #ComicConAtHome. pic.twitter.com/HpLkEF3Zur

What do you think? Are you planning to check out Chucky when it arrives in October?