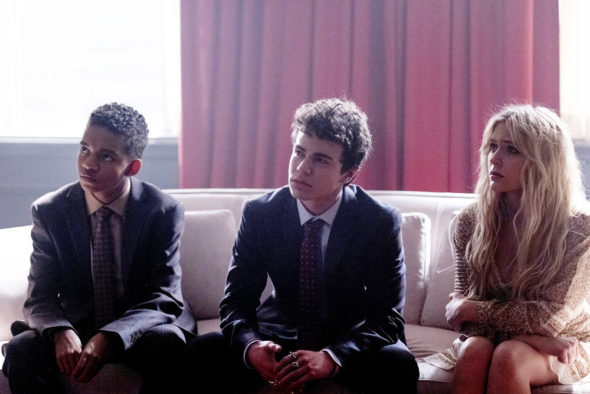 He’s your friend ‘till the very end. Has the Chucky TV show been cancelled or renewed for a third season on Syfy and USA Network? The television vulture is watching all the latest cancellation and renewal news, so this page is the place to track the status of Chucky, season three. Bookmark it, or subscribe for the latest updates. Remember, the television vulture is watching your shows. Are you?

Airing on the Syfy and USA Network cable channels, the Chucky TV show stars Zackary Arthur, Björgvin Arnarson, Alyvia Alyn Lind, and Brad Dourif with Fiona Dourif, Alex Vincent, Christine Elise, Jennifer Tilly, Devon Sawa, and Barbara Alyn Woods in recurring roles. In the story, an idyllic American town is thrown into chaos after a vintage “Good Guy” doll turns up at a suburban yard sale and is purchased by teen Jake Wheeler (Arthur). It turns out to be none other than Chucky (Dourif), a doll that holds the soul of a deceased and vicious serial killer. Soon, everyone in the town must grapple with a series of horrifying murders that begin to expose the town’s deep hypocrisies and hidden secrets. Chucky crosses paths with archenemies, old allies, and new prey, as he seeks to inspire fear and mayhem wherever he goes. After his diabolical plan to invade America’s children’s hospitals was foiled, Chucky now seeks revenge on those he holds responsible — Jake, Devon (Arnarson), and Lexy (Lind), along with his ex Tiffany, now his sworn enemy. Meanwhile, “Jevon” try to make it as a couple in the face of adversity at their new Catholic school, not to mention a brand-new onslaught of terror from the demon doll.

On USA Network, the second season of Chucky averaged a 0.10 rating in the 18-49 demographic and 249,000 viewers in the live+same day ratings (includes all DVR playback through 3:00 AM). Compared to season one, that’s down by 19% in the demo and down by 20% in viewership.

While these numbers don’t include further delayed or streaming viewing, they are a very good indicator of how a show is performing, especially when compared to others on the same channel. Though other economic factors are involved, the higher-rated shows usually get renewed and the lower-rated ones get cancelled. Find out how Chucky stacks up against other Syfy TV shows.

Will Syfy and USA Network cancel or renew Chucky for season three? The show is based on an established brand and has performed well for Syfy. Episodes are simulcast on USA (which currently doesn’t have any other scripted series), making the show even more lucrative. I think there’s a very good chance that Chucky will be renewed for a third year. I’ll update this page with breaking developments. Subscribe for free alerts on Chucky cancellation or renewal news.

What do you think? Do you hope that the Chucky TV show will be renewed for a third season? How would you feel if Syfy and USA Network cancelled this TV series, instead?