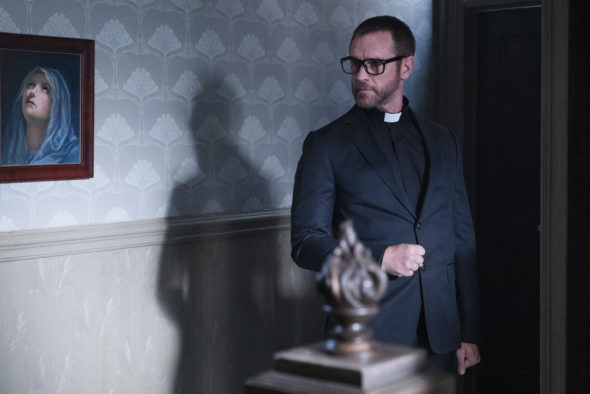 The doll is out for revenge in the second season of the Chucky TV show on Syfy and USA Network. As we all know, Nielsen ratings typically play a big role in determining whether a TV show like Chucky is cancelled or renewed for season three. Unfortunately, most of us do not live in Nielsen households. Because many viewers feel frustrated when their viewing habits and opinions aren’t considered, we invite you to rate all of the second season episodes of Chucky here.

A Syfy and USA Network dark comedy and horror series, the Chucky TV show stars Zackary Arthur, Björgvin Arnarson, Alyvia Alyn Lind, and Brad Dourif with Fiona Dourif, Alex Vincent, Christine Elise, Jennifer Tilly, Devon Sawa, and Barbara Alyn Woods in recurring roles. In the story, an idyllic American town is thrown into chaos after a vintage “Good Guy” doll turns up at a suburban yard sale and is purchased by teen Jake Wheeler (Arthur). It turns out to be none other than Chucky (Dourif), a doll that holds the soul of a deceased and vicious serial killer. Soon, everyone in the town must grapple with a series of horrifying murders that begin to expose the town’s deep hypocrisies and hidden secrets. Chucky crosses paths with archenemies, old allies, and new prey, as he seeks to inspire fear and mayhem wherever he goes. After his diabolical plan to invade America’s children’s hospitals was foiled, Chucky now seeks revenge on those he holds responsible — Jake, Devon (Arnarson), and Lexy (Lind), along with his ex Tiffany, now his sworn enemy. Meanwhile, “Jevon” try to make it as a couple in the face of adversity at their new Catholic school, not to mention a brand-new onslaught of terror from the demon doll.

What do you think? Which season two episodes of the Chucky TV series do you rate as wonderful, terrible, or somewhere between? Do you think that Chucky should be cancelled or renewed for a third season on Syfy and USA Network?