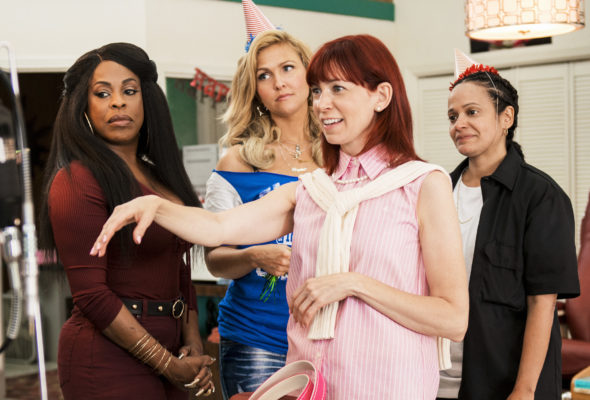 “There’s a fire brewin’.” TNT has released a new sneak peek at season two of Claws.

Season two of Claws premieres on TNT this summer.

What do you think? Are you a fan of Claws? Will you watch the new season?

Yes! I love this show!

When is this coming back?!! Seriously! I’ve been waiting and I thought it was to be in March….ugh PLEASE bring it back soon!!

I really like this show, it is so funny! And the cast has great chemistry — the storyline is great, pretty silly at times but it’s hilarious! Keeps me watching…

Many may think this show is the trashiest show ever to hit TV and I would say, your exactly right! But dad gum it’s good and so dad gum realistic! I love it! Please don’t let it be the last season! I mean dadgum, I got ideas for characters, plots and twists filled with decite and backstabbing. I can’t wait for the new season to start! OMG yes, yes, YES! YOU GO TNT, FOR BRING THIS SHOW BACK. I SURE HOPE MS. POLLY HAS PLENTLY OF PARTS. SHE IS SO FUNNY. I SURE AM LOOKING FORWARD TO THIS SHOW. WHAT… Read more »

I can’t wait I love the show