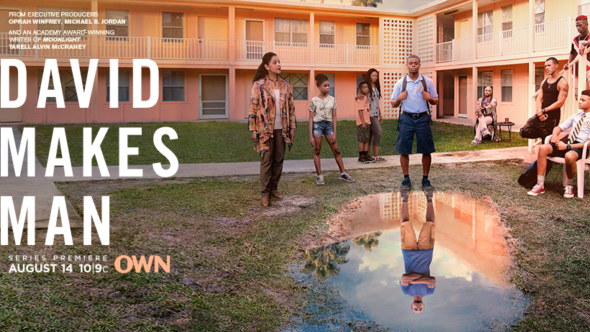 OWN has developed a loyal audience for its drama series. The latest entry in this category is the David Makes Man TV show, from Tarell Alvin McCraney, who won an Academy Award for his Moonlight screenplay, based on his novel, In Moonlight Black Boys Look Blue. How will his work translate from the page and silver screen to the small screen? Will David Makes Man be cancelled or renewed for season two? Stay tuned. *Status update below.

What do you think? Do you like David Makes Man TV series? Should this OWN TV show be cancelled or renewed for a second season?

David makes man should be renewed. Love the show.

Love this show since day. Please bring it back

Continue this show, its amazing

Frankly, I wish the show would be picked up by Netflix. Bring in some tighter editing (awkward pauses in dialogue) or even stronger directing? The actors all have what it takes, but at times, and only by a couple of characters, the dialogue timing is off. Engaging characters we feel for in their struggles and triumphs. I’d really like to see more as so many issues still unresolved. This show has the bricks and mortar to be magnificent, just needs some sound construction.

I love this show! Please bring it back for another season

Please bring this show back for season 2!!! I love it so much.

I LOVE THIS SHOW AND I DO NOT WANT IT CANCELLED!!!! PLEASE COME BACK FOR SEASON TWO!!!

Please, please bring this show back. This show is real. The media projects all the negativity about life in the “hood.” But this show takes it one step further by showing the struggles for our young black boys and men. Especially for those who are gifted and talented living under those conditions. I love this show.

I absolutely love this show as it has real emotion and meanings to me and my family. Please have season 2 as I will be watching it again.

Awesome show! There needs to be a season 2. There so many questions that need to be answered. Great young actors!

Please please please bring David makes man back……absolutely love this show and ALL of its characters!!!!!!!!

Please bring this show back i absolutely love it!

This show was good from day 1. I even downloaded the song Sing to the Moon by Laura Mvula that plays in some of the episodes. I hope there will be a season 2!

Please bring this show back. It was a great show. Also the way it ended we needed to find out what happened with Seren. Also what happen with David’s mother. Did she continued to stay on the drugs? Did she find a job did David go to the school that he wanted to go to. You can’t just leave us hanging like that.