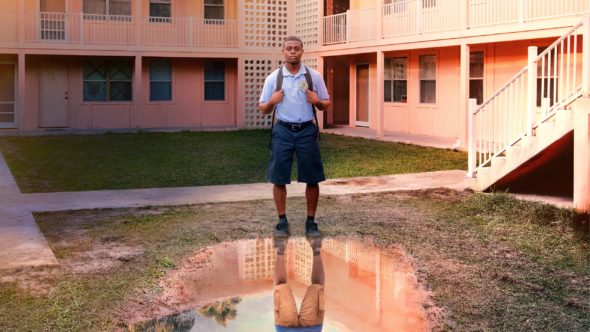 TV show description:
From creator Tarell Alvin McCraney, the David Makes Man TV show is a coming of age drama that unfolds in South Florida. The series centers on David (McDowell), a 14-year-old prodigy growing up in “The Ville” — the Homestead Village housing projects.

David is still struggling to come to terms with the death of his friend. He also feels torn between the streets where he grew up and the future he might achieve through higher education.

A former drug user, David’s mother, Gloria (Arenas), is an industrious woman who wants to make better lives for her children. She counts on David, and he knows it. Likewise, his young brother Jonathan Greg or “JG” (Williams) may act tough, but he still relies on David.

In The Ville, David’s community includes Mx. Elijah (Coles), a gender queer person. This lifelong resident knows a lot but plays most things close to the vest.

The mysterious Sky (Johnson) is a deep thinker who considers David a friend. Despite the fact that he’s a dope dealer, he’s also a mentor to the young man.

Raynan (Torbert) runs things for Sky. Although he also tries to forge a connection with him, he wants David to be more of a follower than a friend. His lieutenant Shinobi (Bolger) resents David and the attention he gets.

At his magnet school, David’s circle includes his best friend, Seren (McIntyre), who is keeping a painful secret. Like David, he is academically gifted. The lively, sharp Dr. Woods-Trap (Rashad) is one of David’s teachers. She advocates for him, and in some ways is a mother to him, even though she can be intimidating.

Inspired by events in McCraney’s life, David Makes Man delves into the issue of childhood trauma and explores the power of imagination as a means of survival.


What do you think? Do you like the David Makes Man TV series? Should this OWN TV show be cancelled or renewed for another season?

One of the few tv shows I watch other than sports..

I hope they have a 2nd season..I look forward to watching this show

This is a great show and I hope they continue it because I am so attached now. I told so many people to watch it and I’d hate to disappoint them.

David makes Man’s writers and actors have successfully managed to project a raw, passionate, powerful and touching story. But its an exceptional work. Thanks!

David Makes Man really needs to be renewed. Very rarely do we see a “raw” portrayal of the life and hardships of a young black man. The content is riveting!

Please do not cancell. I lo e this show David meets man.

I love the show and hope there will be a second season. I watch it with my 16yr old son every week.

I absolutely love this show, it is my hope that you will bring it back for season 2. Pleas Please don’t leave us guessing.

Maybe some reruns will come back on!! Great series I hope for season 2 !