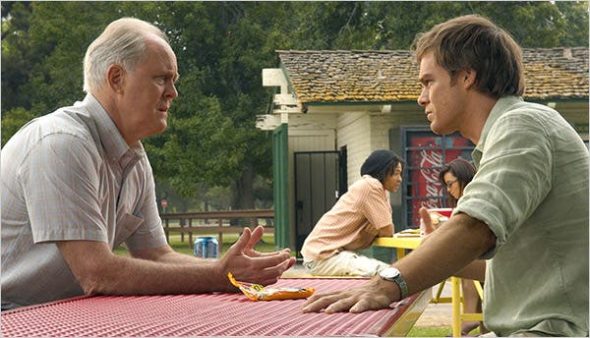 Dexter fans will soon see the Showtime series return and they will also see the return of a big killer from the original run – or at least the actor who played him will be back.

John Lithgow was killed by serial killer Dexter Morgan (Michael C. Hall) during season four of the series, but Deadline reports that the actor is back for a ‘short and decisive run’ as the Trinity killer. He will only film on set for one day.

The following was revealed about his return to the Showtime series.

“Details are scant, but scribes on the Clyde Phillips-showrun 10-episode limited series have concocted a pathway for the Trinity Killer to come back that works within the larger Dexter narrative.”

Lithgow won an Emmy Award for his role on the series in 2010. A premiere date for the Dexter revival will be announced at a later date.

What do you think? Are you planning to check out the Dexter revival on Showtime?

Yes I will. Can’t wait till it comes back. Should be great. Only wish it was more then 10 episodes.

The trinity killer escaped from Hell??

Damn it, we gotta do something about the security down here….

I don’t think that Lumber Jack Dexter will be as good. They need to move back to Miami and bring back the cast that wasn’t killed off. Think I will pass on this one

Time to invest in plastic.

Lithgow was awesome during his Dexter season. Beyond shocked when he killed Rita.