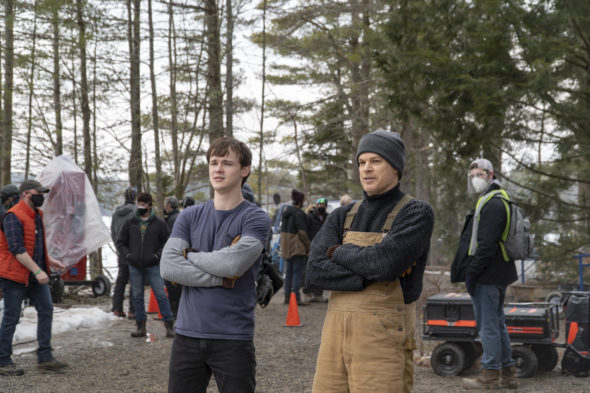 Serial killer Dexter Morgan is returning this fall in Dexter: New Blood and more has been teased about the upcoming special event series. A new behind-the-scenes photo (above) was also released.

Gary Levine, Showtime President of Entertainment, spoke about the return of the series at the TCA’s on Tuesday, and he sees this return for Dexter as giving the fans a ‘proper finale.’ He said the following about the series, per Deadline:

“Dexter is a jewel in the crown of Showtime and we didn’t do it justice in the end. That has always been a burr under my saddle, We’ve always wanted to see if there was a way to do it right and it took a long time to figure out what that was. It took a long time for Michael [C. Hall] to be willing to revisit the role. We’re thrilled to get [Clive] Phillips back. We finally got to a place that I just can’t wait to show the world. We call it a limited series but the rules say it can’t be a limited series if it’s coming from something that was on the air for a long time. So we call it a special event here. For me, it’s a revisiting of Dexter and a proper finale for a brilliant season.”

As for the possibility of more Dexter in the future, Levine would not rule it out.

SPOILER ALERT Levine is not the only one talking about the return of Dexter. Jennifer Carpenter is also returning as Dexter’s younger sister, Deb. Her character died in the original series but will return as a voice in Dexter’s head. Carpenter said the following, per Deadline:

“I love the concept of the Dark Passenger and being invited into Dexter’s psyche. I feel like sometimes the Dark Passenger and the passenger is almost directly behind the wheel and it was an opportunity not to be an angel or devil on his shoulder, but to jerk the wheel to the left or right against his will. And to manipulate him, to navigate him, to abuse him, to save him. I felt like it was something entirely different than some sort of ghost entity.”

Dexter: New Blood will arrive on Showtime on November 7th.

What do you think? Are you excited about the return of Dexter to Showtime?

If Showtime cancels Dexter, I am cancelling Showtime!!Go Dexter!!!

yes, yes ,yes so excited to have more of Dexter

Yes very excited about!! Love Dexter! Was a great show!

I ‘m so excited for the return of this brilliant series! I was so disappointed in the ending of the original series!

Not interested in the new Dexter. Relocate to Miami and bring back the old gang. I’ll pass on the lumberjack shows

Dexter should have stayed in Florida. Hell knows there would be plenty to keep him busy there…. and he would have a hard time keeping up with Ronnie Deathsentence in total body count.

I for one cannot wait!! I hated the way they ended the series – I’m hoping this finally gives it the ending it deserved

Hope there is a season 2. We want more Dexter!