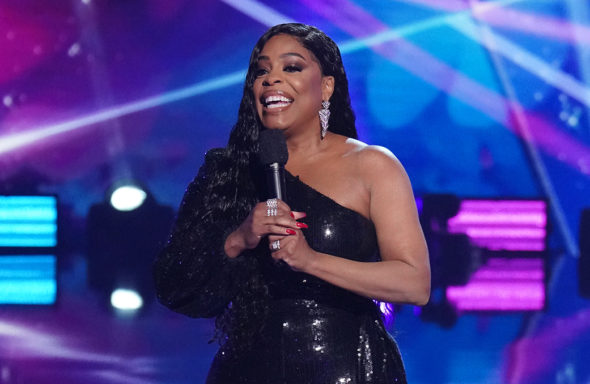 FOX is reviving the Don’t Forget the Lyrics! competition series. The network first introduced the music game show, hosted by Wayne Brady, back in 2007. It ran for two seasons and 54 episodes before being cancelled. The revival will debut at some point during the 2021-22 television season and actress Niecy Nash serve as the host. Nash was most recently seen filling in for Nick Cannon as host of the network’s The Masked Singer.

Contestants’ Musical Memory Is Challenged as They Get One Song Closer to Winning One Million Dollar Prize If They DON’T FORGET THE LYRICS!

Everyone thinks they know the words to the most popular songs of all time, but when there’s a million dollars at stake, will contestants be able to keep singing when the music stops? Or will they be at a loss for words? Emmy Award nominee Niecy Nash hosts the all-new version of the popular game show DON’T FORGET THE LYRICS!, which will debut during the 2021-22 season on FOX. The series, created by Jeff Apploff, also will stream on Tubi, FOX Entertainment’s free-streaming platform.

“Whether it’s tapping a toe to keep rhythm, humming a melody or outright singing along, music is one thing that is universally appealing. DON’T FORGET THE LYRICS! wraps everything about why people love, enjoy and treasure music into one big, fun, high-energy and high-stakes show,” said Rob Wade, President of Alternative Entertainment and Specials, FOX Entertainment. “Niecy Nash is one of the most talented, beloved and spirited people in the business. She’s been a dear friend to FOX for many years, most recently on THE MASKED SINGER, and we are so happy to keep her on our air next season with DON’T FORGET THE LYRICS!.”

“I’m so excited to be part of the DFTL family,” added Nash. “I love music and I’m happy to be involved in a show that gives people an opportunity to win life-changing amounts of money.”

“DON’T FORGET THE LYRICS! has been my baby ever since it originally premiered in 2007,” noted Apploff, show creator and executive producer. “Not only was it a hit on FOX, but we also sold the show in over 20 countries around the world. The time is perfect to make it even bigger and better! We are so thankful to bring back this amazingly fun and entertaining show with the incredible Niecy Nash at the helm.”

The popular game show returns to challenge contestants’ musical memory, as they get one song closer to winning $1 million if they DON’T FORGET THE LYRICS!. Contestants will choose songs from different genres, decades and musical artists. Then they’ll take center stage to sing alongside the studio band as the lyrics are projected on screen – but suddenly the music will stop, and the words will disappear.

About Niecy Nash
Niecy Nash is a multi-talented Emmy Award-winning producer and three-time-nominated actress who currently headlines the cable series “Claws” and recently guest-hosted FOX’s THE MASKED SINGER. Her multifaceted career includes roles in the premium cable series “Getting On,” which earned her two Emmy Award nominations; creator/director Ava DuVernay’s streaming series, “When They See Us” (which earned her a third Emmy nomination and an NAACP Image Award), based on the exonerated Central Park Five; FOX’s “Scream Queens”; premium cable series “Masters of Sex”; cable comedy “The Soul Man”; and limited series “Mrs. America.” Nash was the host and producer of the cable home makeover show “Clean House.” Her work on the show earned her two Daytime Emmy Award nominations, and the American Women in Radio & Television honored Nash with the 2007 Gracie Allen Award for Outstanding Program Host. In addition, she regularly was seen as a celebrity panelist on the top-rated entertainment news program “The Insider. Nash is well-known for her role as no-nonsense “Officer Raineesha Williams” on the cult hit comedy series “Reno 911!” Nash went on to star in her own FOX comedy series, “Do Not Disturb,” opposite Jerry O’Connell, in 2008. Nash had featured roles in the films “Selma”; “Guess Who,” opposite Bernie Mac and Ashton Kutcher; “Code Name: The Cleaner,” opposite Cedric the Entertainer and Lucy Liu; “Not Easily Broken,” based on the best-selling book by Bishop T.D. Jakes; and the Walt Disney Pictures summer blockbuster release “G-Force,” produced by Jerry Bruckheimer. Most recently, she starred opposite Courtney Vance in the streaming film “Uncorked.”

About Apploff Entertainment
Apploff Entertainment is a cutting-edge production company that specializes in creating, developing and producing world-class content and groundbreaking formats around the world. The company is well-respected for its consistent work with all of the top broadcast networks, as well as creating and packaging custom content for world-renowned mobile apps, celebrities and beloved brands in all forms of media. Apploff Entertainment currently is producing three different series on FOX, including Season Four of BEAT SHAZAM, hosted by Academy Award and Grammy winner Jamie Foxx; Season Two of MENTAL SAMURAI, hosted by Rob Lowe and produced in conjunction with Warner Horizon and A. Smith & Co. Productions; and GAME OF TALENTS, hosted by Wayne Brady and produced in conjunction with Fremantle N.A.

Following the DON’T FORGET THE LYRICS!’ linear telecast, it will be available on FOX Entertainment’s free streaming platform, Tubi, which features more than 30,000 movies and television shows from over 250 content partners, including nearly every major studio.

Created by Jeff Apploff, DON’T FORGET THE LYRICS! is produced by Apploff Entertainment and Bunim/Murray Productions. Jeff Apploff, Rupert Dobson and Niecy Nash serve as executive producers. DON’T FORGET THE LYRICS! is a Banijay format that first aired in 2007 and has been adapted in over 25 countries, most notably in France (Air Productions). “Like” the series on Facebook at https://www.facebook.com/LyricsonFOX/. Follow the series on Twitter @LyricsOnFOX and IG @LyricsOnFOX and join the conversation using #LyricsOnFOX.

What do you think? Do you remember the original version of the Don’t Forget the Lyrics! TV series? Do you plan to check out the revival on FOX?

We had fun watching Nick Cannon on Don’t Forget the Lyrics. It depends on the age demographic type of music that will be played for the game. We, and so many other people in our age demographic 65+ like music from the 60’s, 70’s, 80’s and 90’s so we hope those years will be in this game show…..please. Music is so important to our age group now as it helps with our memories and guessing the song titles. That’s what we liked about Nick Cannons time on Don’t Forget the Lyrics.