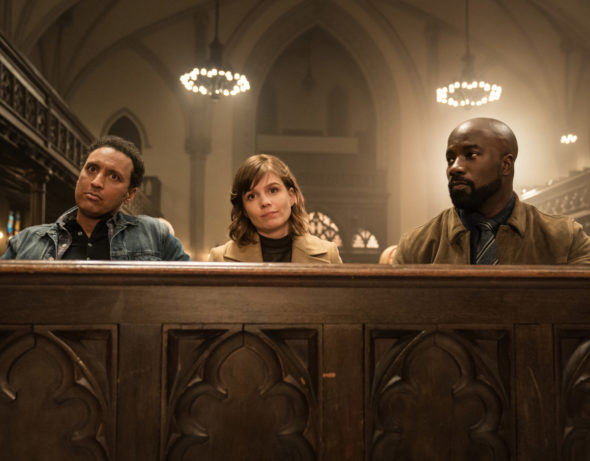 The cast of Evil is ready to start production on the second season of the series, but they made a virtual stop at New York Comic Con first. During their panel, they teased the new season and released a special ‘homemade’ trailer.

During the new season of the CBS series, fans will see a romance of sorts develop between Herbers and Colter, but it won’t be traditional. A silent episode is also set for season two of Evil. New characters, including an avenging angel, are set to arrive during the season as well.

Per TV Insider, Robert King said the following about season two of Evil:

“We have, I would say, five or six new scary things this year. We were more intent this year on having scares that were essential to the plotting of the show.”

Check out the Comic Con panel and the new “homemade” teaser (starting at 2:47) for the new season of Evil below.

What do you think? Are you a fan of this thriller series? Will you watch season two of Evil on CBS?

I am so hooked on Evil. Watched all of season 1&2. Will there be a season 3? I am having withdrawals! Aloha from Hawaii

I’m thrilled to see a season 2 of Evil. Love watching shows portraying good and evil with a narrative that could be someone’s reality. A show that makes you wonder about God and the Devil / good over evil / and a mix of a psychological / psychiatric and scientific point of view.

I love the show, I explain it as the EVIL men do. It only eyes to a lot of things. Great show.

Love this show! Please hurry to bring it to us!

Love it can’t wait for season 2 to start

I keep looking to see when season 2 wil start, I can’t wait