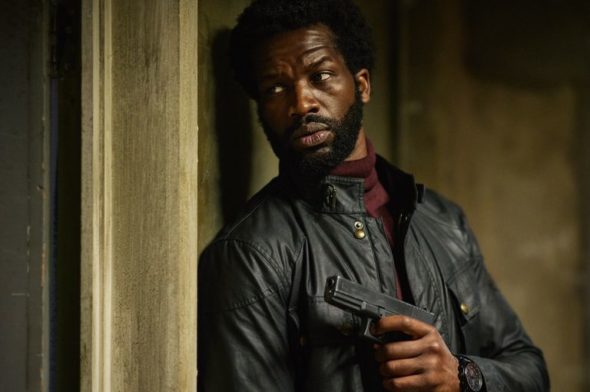 AMC+ revealed more about the return of the series in a press release.

AMC+ has released a ruthless red band trailer for the critically-acclaimed series, Gangs of London. The award-winning drama became an international sensation in season one, with shocking yet artfully choreographed action scenes and stunt work. The second season returns with its trademark grit and gore on Thursday, November 17 with the first two episodes. Following the premiere, one episode of the eight-part season will debut Thursdays on AMC+, AMC Networks’ premium streaming bundle.

In the second season, a new, darker era of chaos and turbulent power struggles comes to London. One year after the death of Sean Wallace and the violent reckonings of season one, the map and soul of the city has been redrawn – the surviving Wallaces are scattered, the Dumanis broken and estranged, and ex-undercover cop Elliot Finch (Ṣọpẹ́ Dìrísù, Humans, Mr. Malcolm’s List) is now being forced to work for the Investors. To restore order, the investors have aligned behind heroin baron Asif Afridi (Asif Raza Mir, Daaman) and together they have installed a new ruling force in London in the form of brutal gang leader – Koba (Waleed Zuaiter, Baghdad Central). He and his paramilitary enforcers have stamped a new kind of authority; battlefield atrocities, torture, and family kidnap, all coldly designed to terrorize the other gangs into submission. Koba’s vision for the criminal landscape is a dictatorship, a world in which old school gangster codes don’t exist and in which he holds a complete monopoly over London’s drug trade. But this monopoly can’t last forever, and the gangs are fighting back – who will win the battle for London’s soul?

Season 2 of Gangs of London will see our old favorites and new players fight back against the new order, forcing sworn enemies to work together and family members to betray each other. Full of twists, turns, brutal murders and exhilarating, cinematic action sequences, the series will introduce us to new characters and unexpected leaders will emerge.

Check out the Gangs of London NSFW trailer for season two here. The series returns on November 17th.

What do you think? Are you excited to see season two of Gangs of London on AMC+ next month?

Well, here we go again. I enjoyed the first season, but now find that the 2nd will require a subscription to AMC+. No thanks. It’s not the price, but the principle and please don’t scratch your heads in confusion when you realize that the USA market isn’t tuning in

Was excited to see the second season. But won’t with its move to AMC+. There is a lot of other good shows on Thursdays, so main loss is for AMC’s owners.