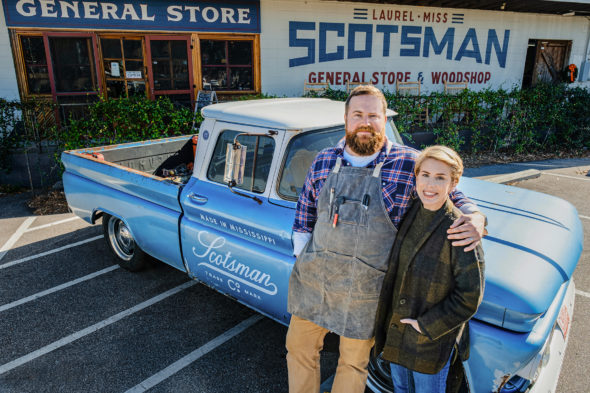 The Home Town franchise is expanding! HGTV is adding Home Town Kickstart Presented by People to its line-up. The new series will take viewers to six small towns around the country as Ben and Erin Napier work to revitalize each community. The show will launch in 2022.

HGTV revealed more about the new series in a press release.

“Inspired, fueled and championed by two HGTV blockbuster hit series, Home Town and Home Town Takeover starring Ben and Erin Napier, America’s sweeping small town renaissance movement will get an even bigger national spotlight when the network expands the epic franchise with a greenlight for Home Town Kickstart, a new series presented in partnership with, PEOPLE, the No.1 brand in the United States celebrating popular culture. Scheduled to premiere in 2022, Home Town Kickstart Presented by PEOPLE (wt), will give six quintessential small towns across the country a major boost to re-energize their revitalization efforts and realize a much-needed fresh start.

“Erin and I have renovated more than 80 homes in Laurel for Home Town and we’ve seen how these improvements change a community for the better,” said Ben. “Now, with help from HGTV, we’re going to continue what we started and help more small towns across the country.”

During Home Town Kickstart Presented by PEOPLE, HGTV will mobilize and deploy its biggest stars to activate a three-pronged kickstart mission for each selected town: refresh the home of a local hero, give a small business an upgrade and invigorate a public space that will forever change the lives of everyone in the town. In addition, PEOPLE magazine will share the unique stories of each town and its most intriguing people.

“The staggering success and positive impact of Home Town Takeover showed us that the idea of small town revitalization resonates with America,” said Jane Latman, president, HGTV & Streaming Home Content, Discovery, Inc. “To keep this incredible momentum going with Home Town Kickstart, we went back to the thousands of submissions we received for Home Town Takeover and identified six more towns to support with HGTV’s star power and expertise. And, our collaboration with PEOPLE gives the selected towns another valuable showcase that could lead to more support and growth.”

HGTV will premiere a new season of its flagship series Home Town on Sunday, December 26, at 8 p.m. ET/PT. The series, which attracted more than 31 million viewers during the last season, follows the Napiers as they renovate homes in their own hometown of Laurel, Mississippi.

What do you think? Are you excited about seeing this new addition to the Home Town franchise on HGTV?

I love anything Ben and Erin related! I will be watching. 🙂

I love Hometown! I loved how they revitalized Wetumpka, Alabama. I’m sure the other shows will be great, as well. Looking forward to them!