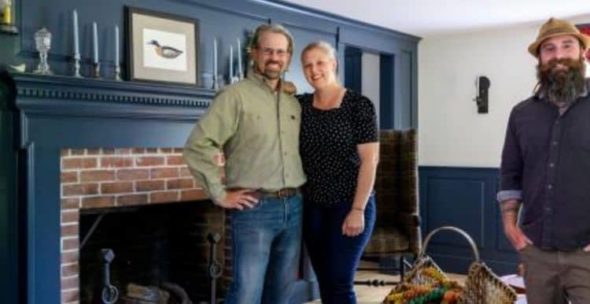 Houses with History is returning for a second season. HGTV has renewed the series which follows Mike Lemieux, Rich Soares, and Jen Macdonald as they reveal the history of homes before they restore them. The first season of six episodes debuted last fall. Season two is expected to have eight installments and air early next year.

“HGTV has ordered eight new one-hour episodes of Houses with History starring history buff Mike Lemieux, carpenter Rich Soares and designer Jen Macdonald. During the series, which attracted nearly 14 million viewers in its freshman season, the history-obsessed trio explore the fascinating backstories of America’s oldest homes near Plymouth, Massachusetts, and help save these remarkable centuries-old properties with stunning restorations. In each episode, they also share the homes’ unique origins and past renovation stories. The new season is slated to premiere in early 2023.

“Houses with History is one of the series where we flipped the idea of what makes a good renovation story on its head and led with the backstory of the house, rather than the homeowner,” said Loren Ruch, group senior vice president, programming & development, HGTV. “A successful first season and a renewal for a second is because Mike, Rich and Jen are fantastic, humorous storytellers, and when it comes to our nation’s oldest homes, the unexpected twists that are revealed during each renovation are always fascinating.”

While fans wait for the new episodes to premiere, they can binge watch the first season of Houses with History on discovery+. Fans also can find more show content and photo galleries at HGTV.com and follow @HGTV and #HousesWithHistory on Facebook, Twitter, Instagram and TikTok for additional show updates.”

What do you think? Are you excited to see more of this restoration series on HGTV?