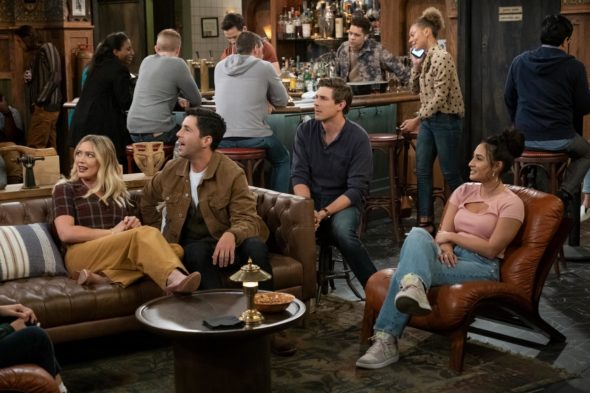 Sophie’s tale is getting longer. Hulu has renewed the How I Met Your Father TV series for a second season.

Set in the same world as the How I Met Your Mother comedy series, How I Met Your Father stars Hilary Duff, Christopher Lowell, Francia Raisa, Suraj Sharma, Tom Ainsley, Tien Tran, and Kim Cattrall. Recurring actors for season one include Daniel Augustin, Ashley Reyes, Leighton Meester, Josh Peck, and Stony Blyden.  The story begins in the year 2050 when an older Sophie (Cattrall) is telling her son the story of how she met his father. In the year 2022, Sophie (Duff) and her close-knit group of New York friends are in the midst of figuring out who they are, what they want out of life, and how to fall in love in the age of dating apps and limitless options. Her friends include Valentina (Raisa), an impulsive assistant-stylist who’s also Sophie’s roommate; Jesse (Lowell), an Uber driver and aspiring musician; Sid (Sharma), Jesse’s best friend and roommate who owns a bar; Ellen (Tran), Jesse’s adoptive sister who’s moved to NYC after a divorce from her wife; and Charlie (Ainsley), a British aristocrat who abandoned his inheritance to follow Valentina the Big Apple.

How I Met Your Father is written by Isaac Aptaker and Elizabeth Berger. Executive producers include Aptaker, Berger, Carter Bays, Craig Thomas, Pam Fryman, and Adam Londy. Duff also serves as a producer.

The series debuted on January 18th with a pair of episodes. New installments have been released weekly on Hulu and the first season’s finale is slated for March 15th. Additional details and a premiere date for season two will be announced in the future.

What do you think? Have you been watching the How I Met Your Father TV show on Hulu? Are you glad to hear that it’s been renewed for a second season?