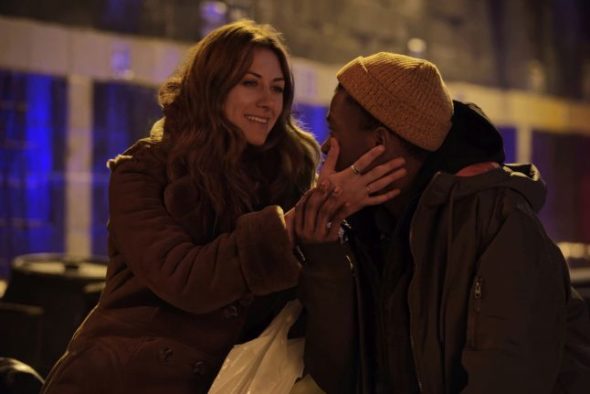 There’s good news tonight. The CW has given an early third season renewal to the network’s In the Dark TV series. The show was renewed for a second season back in May 2019, while the first season was still airing. There’s no word on when season two will see the light of day but a summer run seems likely.

A comedy-drama, In the Dark stars Perry Mattfeld, Rich Sommer, Brooke Markham, Casey Deidrick, Keston John, Morgan Krantz, Thamela Mpumlwana, Derek Webster, and Kathleen York. The story follows a hard-drinking and smoking blind woman, Murphy Mason (Mattfield). When she stumbles upon the body of a drug-dealing kid, Tyson (Mpumlwana), who once saved her from a mugger, Dean Riley (Sommer) and the other cops find her drunken account less than convincing and nobody in sight. Frustrated and heart-broken, Murphy, her guide dog, Pretzel, and best friend, Jess Damon (Markham), set out to uncover the truth about Tyson’s fate. Murphy will do whatever it takes — even if that means setting down her drink.

What do you think? Do you like the In the Dark TV show? Are you looking forward to its second season premiere (whenever that may be)?

ABSOLUTELY LOVE THE SHOW THE ACTRESS IS AWESOME! NEED TO GET RID OF THE DUMB LOOKIN FFOR LOVE OR MARRIIAGE SHOWS! LEAVE THIS SHOW ALONE!!

This is another tv show we need back asap and hope it’s not not going to be cancelled. When will it return in 2020?

I really enjoyed season 1 and can’t wait for 2 to air. An engaging show with fairly complex characters when they could have been very 1 dimensional. A lead character with disabilities is great too. When was the last time? Ironsides?

Season 2 NEEDS TO HURRY ASAP!!! I love this show

I really enjoy this show. Bingewatched twice! Waiting for season 2.

Loved loved loved this show & can’t wait for season 2!!!!! I hope Murphy & Max get back together, cause they were the cutest.

Finally a show I want to know more and more about…If you are wise….you will renew this show..I understand ratings…and money…this WILL explode as a show if given time…there is a SEA of **** on the air….please maintain some quality with IN THE DARK….

Can’t wait for season two it’s been too long! Love the show.

I love this show! I too couldn’t wait for season 2 after just one episode! Perry is awesome, she is the person I wish I had the guts to be!

I love this show. I was hooked from the very beginning. I can’t wait for the new season.

LOVE this show!! Every episode takes me through a rollercoaster of emotions. The acting, writing and cinematography is EXCELLENT!

Can’t wait for the second season! Love this show!