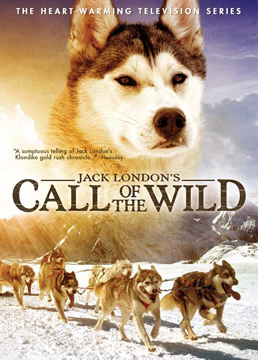 This beautifully filmed series was nominated for a Leo Award for Best Cinematography in a Dramatic Series by Stephen McNutt and for Best Production Designer by Brian Davies in the episode called “The Attack.” Additionally, it was nominated for the 2000 Emmy for Outstanding Main Title Theme Music by Hal Beckett.

You can purchase Call of the Wild

UPDATE: Congratulations to Bev Schmidt who won this DVD set in our contest. Thanks to everyone who played and we’ve got more contests coming!

Would love to see this.

Entering again, because I really want to see this again! 🙂

I read the book years and years ago. I would love to own this set and enjoy the story again.

I have always been an addict of nature films and documentaries. I’m a first wave generation of a baby boomer from Tijuana, Mexico and leaving next door to San Diego, California since 1949. This geographical happenstance made it possible to consume routinely amounts of American TV, low and high brow. Of especial interest and pleasure were the nature series with Merlin Perkins of a certain insurance company from Nebraska. In San Diego, we used to enjoy Zoorama with Bob Dale at channel 8. I’ve been a dog lover all my life and this TV series would be an excellent addition… Read more »

I don’t remember this show at all. I loved the book growing up. My daughter loves animals and remembers this book from middle school.

Please enter me to win the series Call of the Wild. I love this book!
Recently attended a Dryland Dog Sled Race in Maryland. Awesome!

My son would love it. Please put me in the running.

The wife and kids would really love this one. Sign me up.

Very heartwarming series! I would love to win it!

I would give it away as a gift to someone. Gimme gimme gimme .

My son loves dogs about as much anything in the world. He would love to own this DVD.

I would love to see this!