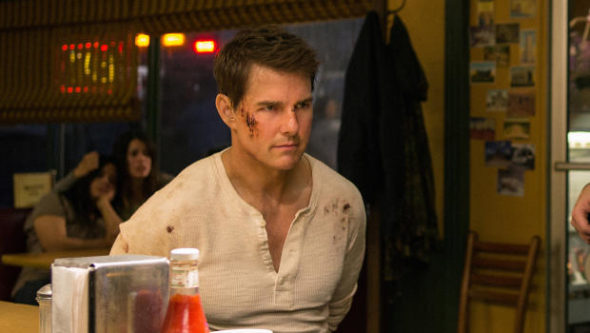 Is Jack Reacher coming to the small screen? Deadline reports there is a TV show in the works based on the Lee Child books and Tom Cruise movies.

In an interview with BBC Radio Manchester, Child said he is working on a Jack Reacher TV series. Unfortunately, Cruise will not be involved in the project, but you can read more info below:

I really enjoyed working with Cruise. He’s a really, really nice guy. We had a lot of fun. But ultimately the readers are right. The size of Reacher is really, really important and it’s a big component of who he is… So what I’ve decided to do is – there won’t be any more movies with Tom Cruise. Instead we’re going to take it to Netflix or something like that. Long-form streaming television, with a completely new actor.”

What do you think? Are you a fan of the Jack Reacher books and/or movies? Would you watch the TV show?

I have every Jack Reacher book and can’t wait! How about Tim Olyphalnt as Reacher?

k.milner
Reply to  Gregory B Cole

Hugh Jackman was always a good choice in my mind. In great shape,6’4″ ,250lbs. The way I remember reading the character and what impressed me the most; Jack being old school and being so physically capable. What do ya think?

Would love to see these books in a tv series. A few actor suggestions. I know you said maybe an unknown but I feel that a lesser known actor we would relate to more.
Stanley Weber. Pilou Asbaek. Max Brown. Craig Horner.. Craig Parker. Looking forward to the series.

I thoroughly enjoyed reading and hearing Lee Child’s Jack Reacher series, However, I cannot stand Tom Cruise – that smile all teeth his ties to Scientology – his acting is strictly – I’m tom cruise hear me roar is not acting it’s just his sort of patented trademark – So I would not enjoy watching any movies with Cruise and have not watched them past the first Mission Impossible years ago – will be so glad to see a Reacher in the style I’ve imagined Chid’s character is so can hardly wait for the new tv series and announcement –… Read more »

I love all things Reacher. We definitely want a Reacher TV Series and here is the guy to play the part. Jeff Bosley, 6’5′, former Green Beret, Special Ops soldier, Acting credentials are in place and he WANTS the part. I agree he should be the new Reacher!!

I’m on the Bosley bandwagon, but my hope is — and this can be done — they do something to not show Bosley’s tatoos. I don’t think Reacher would paint himself up.

Lee child knows. Who Jack Reacher is. And what he looks like , the film industry does not care And wants to make. $$$. Holding nothing against. Mr Tom Cruise actor or his height. Let’s face facts About Mr Lee Childs. Description Of Jack Reacher, And also In reference to recent. Comments about a new series about Jack Reacher, . And Mr Child’s Innate. description of Reacher. It Is not Tom Crusie , reacher is fair and light. Tall Crusie is a big MOVIE. STAR. and draws big bucks. $$$ for the film industry. But sadly he is not the… Read more »

Jack Reacher Is a man of age, not boyish ,righteous, a big tall ex military man ,strong but not Mr. Universe , contained ,smart , independent with a air of confidence and knows who he is.

Love the books, wouldn’t see the movies because of Tom Cruise. Everyone knows Jim Caviezel is Jack Reacher.

Agreed wholeheartedly in the beginning. A friend actually convinced me to watch the films. He felt as we do/did about Cruise, and knowing certain aspects about him– “What? Tom Cruise?!!!” Movies are actually good action flicks featuring Tom Cruise. Watch them for a good adventure thrill ride. Well made and good acting… just not the right choice for lead role.

From the time I read the first novel, Liev Schreiber was the actor I pictured in the role. He’s the right height and build and has proven he can play tough guy roles like Ray Donovan.

In the book series, Jack Reacher possesses preternatural strength and capacity for violence. However, this attribute is matched by his ability to deduce conclusions from seemingly small details. Yet, Jack Reacher is not a cold-hearted person. For the television series, the actor must be significantly larger than the norm, probably 6feet 5 inches or more. He must, also, emanate a presnece that elicits both fear and respect simultaneiously. Further, his visage can only be minimally attractive, pretty boys will not work in this character.

Alexander Skarsgård would be my choice. Tarzan for muscles and True Blood for attitude.
and he already has blond hair

You are correct, this guy looks like Reacher, blonde, blue eyes.

Ed F. I could not have said that better. I think Hugh Jackman would fill the bill.

I kinda want more films, although i think if there are, they should be Cruise, just for continuity.

But Hope there is a series. With a giant.

Maybe one more as a trilogy should be, but… going with something fresh and more genuine to the character tells me bigger hit at the box office and more success with a hit series.

Unfortunately? Reacher is supposed to be 6’5″ and about 230. Tom Cruise playing him is an absolute joke, and I couldn’t get past that fact to get into the movies. Hopefully they get someone more appropriately sized to play him.

as an avid reader of the books couldn’t agree more. Enjoyed the movies but they were never as convincing with Cruise in the role

I enjoyed Cruise in this role. You do not have to be 6.5 to be heroic. You just have to be good.