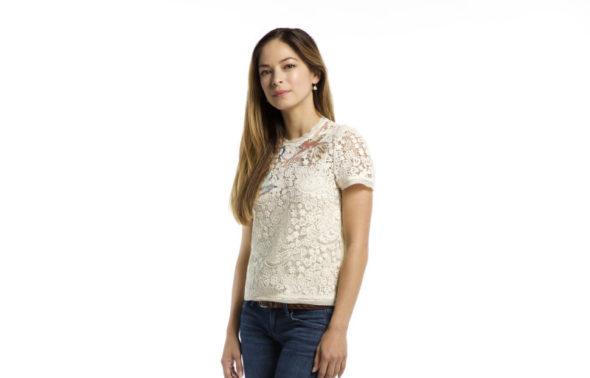 © 2018 Cause One Productions Inc. and Cause One Manitoba Inc.

Reacher has added several big names to its cast, including Kristin Kreuk. The action series is headed to Amazon Prime Video, and it is based on the Jack Reacher character from the Lee Child novel series.

Kreuk, Marc Bendavid, Willie C. Carpenter, Currie Graham, Harvey Guillén, and Maxwell Jenkins have all joined Alan Ritchson in the series. Ritchson is set to play Reacher, and he appeared in several episodes of Smallville which Kreuk starred in for seven seasons.

Deadline revealed more about the roles the additions will play in the Amazon series:

“Bendavid plays Hubble, a frazzled accountant living a grander life than he can afford and gets caught up in a business he would never remotely consider. Hubble loves his family and will do whatever’s necessary to protect them.

Kreuk portrays Charlie. Happily married to Hubble, the refined former debutante is living the Country Club life but is much tougher than she looks.

Carpenter is Mosley. A life-long resident of Margrave and the town barber, Mosley hates what’s going on in Margrave and is happy to help Reacher, advising him on the ins and outs of the small town.

Graham plays Kliner Sr. Beloved by the townspeople for his generosity in saving the struggling town of Margrave, this formidable businessman has a very dark side.

Guillén is Jasper, Margrave’s medical examiner who is suddenly overwhelmed and terrified by multiple murders in his small town.

A premiere date has not yet been set for Reacher.

What do you think? Are you planning to check out Reacher on Amazon Prime Video when it debuts?

I love the Jack Reacher books!! They are great! I hope the guy who plays him will be close to his physical description. Can’t wait!!

Now we know why Bosch got canned. This better be good, and not just another massacre of a great book series like they did with the Tom Clancy universe.

Also, every time I see Kristin Kreuk (NXIVM connection notwithstanding, she probably found out about DOS and sex slavery, and bolted) I just want to scream out “FIONA!!!” and hear “Scotty Doesn’t Know” in my head.

Anyone playing Reacher will be better than Tom Cruise.